The Hurun Research Institute today released the Hurun Richest Self-Made Women in the World 2022, a list of the self-made women billionaires in the world.

124 SELF-MADE women BILLIONaires in world, DOWN 6

CHINA HAS TWO-THIRDS OF WORLD'S SELF-MADE WOMEN BILLIONAIRES with 78, DOWN 7, triple USA in second place with 25; UK THIRD WITH 5.

19 new faces, DOWN FROM 43 LAST YEAR, of which 12 from China. MUMBAi-BASED FALGUNI NAYAR, 58, OF COSMETICS BRAND NYKAA LED WITH US$7.6BN, FOLLOWED BY SHENZHEN-BASED LU YIWEN, 35, OF DIAMOND BRAND DR WITH US$6.2BN, AND SYDNEY-BASED MELANIE PERKINS, 34, OF GRAPHIC DESIGN APP CANVA WITH US$6BN.

RIHANNA, 34, OF FASHION AND BEAUTY BRAND FENTY DEBUTED THIS YEAR WITH US$1BN.

BEIJING self-made woman billionaire CAPITAL OF THE WORLD with 14, DOWN 2. TOP FIVE CITIES ALL FROM CHINA: shENZHEN 2nd with 11, hangzhou 3rd with 9 AND FOLLOWED BY SHANGHAI AND HK. SYDNEY ROSE TO 7TH PLACE.

HEALTHCARE AND software & services main sources of wealth WITH 13 EACH, followed by consumer goods, RETAIL AND energy.

85 saw wealth down on last year, of which 25 dropped out of list. drop-offs include founders of south korea gaming platform nexon and spanish retailer mercadona.

of TOP 20 RICHEST WOMEN IN WORLD, only 1 SELF-MADE AND 19 INHERITED. Francoise Bettencourt Meyers, 68, OF L’OREAL WITH US$79BN, UP 21%, overtook ALICE WALTON, 72, ELDEST DAUGHTER OF WALMART FOUNDER SAM WALTON, to become RICHEST WOMAN IN THE WORLD 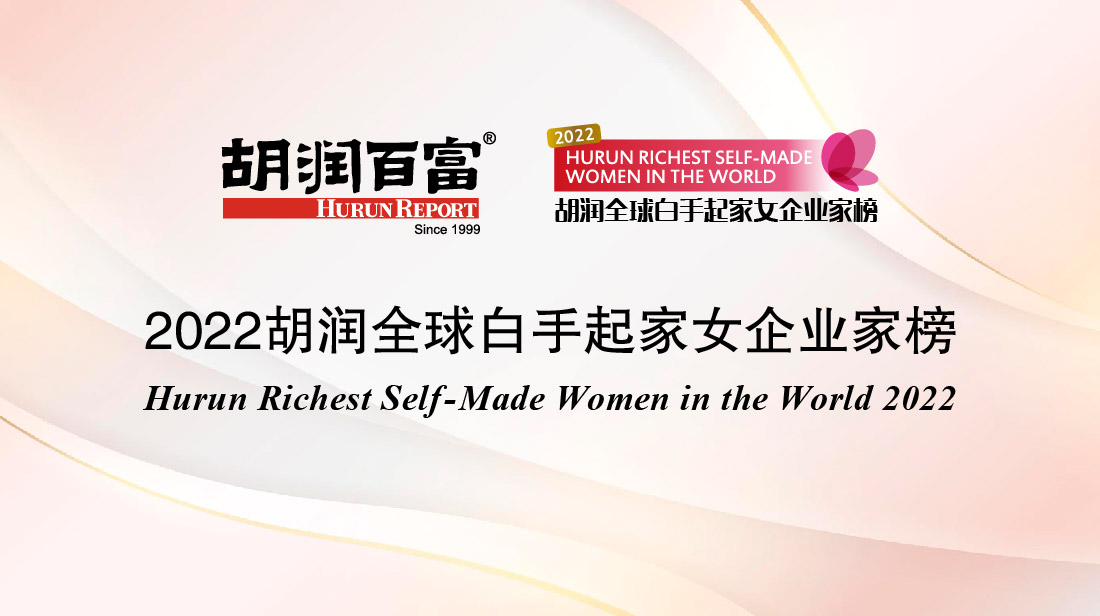 (29 March 2022, Shanghai, China and Mumbai, India) The Hurun Research Institute today released the Hurun Richest Self-Made Women in the World 2022, a list of the self-made women billionaires in the world. This is the 12th year of the list. Wealth is a snapshot of 14 January 2022, drawn from the recently released Hurun Global Rich List 2022.

The average age was 59 years old, 5 years younger than the average age of the recently-released Hurun Global Rich List. 12 are 45yrs or under, same as last year. Of these 5 are from each of China and the US, and 1 from each of Australia and Brazil.

Rupert Hoogewerf, chairman and chief researcher of Hurun Report, said, “There are 124 self-made women billionaires in the world today, double that of five years ago and 100 more than ten years ago.”

“The self-made women billionaires in the world tell the story of the most successful women in business and these stories start with China. Why does China have two thirds of the world's self-made women billionaires, more than double the rest of the world combined? There are historical, political, social and economic dynamics at play here. One indicator can be seen from the Hurun China Private Companies SDG Readiness Index 2021, where Chinese businesses performed strongly in United Nations Sustainable Development Goal 5 Gender Equality.”

“India has tripled the number of self-made women billionaires over the last decade.”

“Japan, Germany, France, Canada and S. Korea are the world’s largest economies without a single self-made woman billionaire. The 124 known self-made women billionaires come from just 16 countries, meaning that 180+ countries still do not have a single one.” 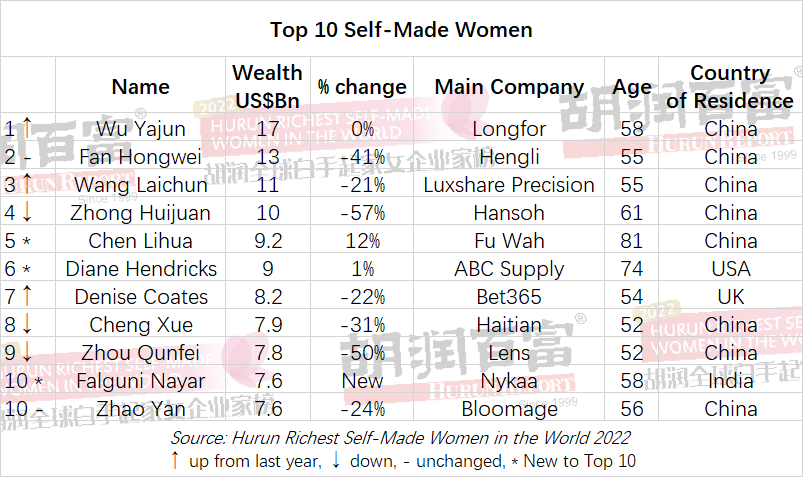 ‘Real Estate Queen’ Wu Yajun, 58, of Beijing-based Longfor takes back the crown of Richest Self-Made Woman in the World, for the first time in three years and fourth time since 2011. In a year when most Chinese real estate stocks dropped significantly, Wu’s Longfor managed to hold its value, by keeping debt relatively low.

Fan Hongwei, 55, of Suzhou-based Hengli saw her wealth drop 41% to US$13bn, but still hang on to second place. Fan and husband Chen Jianhua started out in 1994, growing Hengli to become the largest fibre producer in China serving the apparel industry with sales last year of over US$100bn.

Grace Wang Laichun, 55, of Dongguan-based Luxshare broke into the Top 3 in the world, despite her wealth down 21% to US$11bn. Wang worked for Foxconn for ten years before setting up Luxshare in 2004. Luxshare started out making computer cables but is perhaps best-known for being a key assembler of AirPods for Apple.

Last year’s Number One Zhong Huijuan, 61, of drug maker Hansoh, dropped down three places to fourth, as her wealth dropped to US$10bn. A former chemistry teacher, Zhong set up Hansoh in 1995 first producing generic drugs and then focusing on R&D to produce new drugs.  Hansoh today has one in six of the Chinese FDA-approved new drugs approved in the market.

‘US Construction Queen’ Diane Hendricks, 74, of Wisconsin-based ABC Supply is the richest self-made woman billionaire outside of China, up 7 places to 6th with US$9bn, up 1%. Starting out as a real estate broker, Hendricks then began to distribute roofing, windows, gutters and siding for residential and commercial buildings. ABC Supply reported a revenue of US$12.1bn in 2020.

‘Gambling Queen’ Denise Coates, 54, of gambling website Bet365 is one of only two non-Chinese in the Top 10. Coates has been the highest-paid chief executive in the UK for several years, taking home almost US$2bn since 2016. Bet365 reported a fall in revenue due to the cancellation of sporting events as the Covid pandemic took hold last year.

‘Restaurant Queen’ Cheng Xue, 52, of soya sauce maker Haitian dropped down to 8th place with US$7.9bn, down 31%. Cheng is the most successful professional manager in China, joining Haitian after it was founded and rising through the ranks to become vice chair with a 9% holding in the business.

‘Touchscreen Queen’ Zhou Qunfei, 52, of Shenzhen-based Lens has twice been the Number One Self-Made Woman in the World, but this year her wealth was down 50% to US$7.8bn, dropping the former migrant worker down to 9th. Part of the reason for Zhou’s wealth dropping is the increased cost of raw materials.

Beijing-based Zhao Yan, 56, of skin cream ingredient maker Bloomage held on to a Top 10 place, despite her wealth down 24% to US$7.6bn.

The fastest riser this year for self-made women billionaires was Australia, adding 2 to fourth place in the world on a par with India. 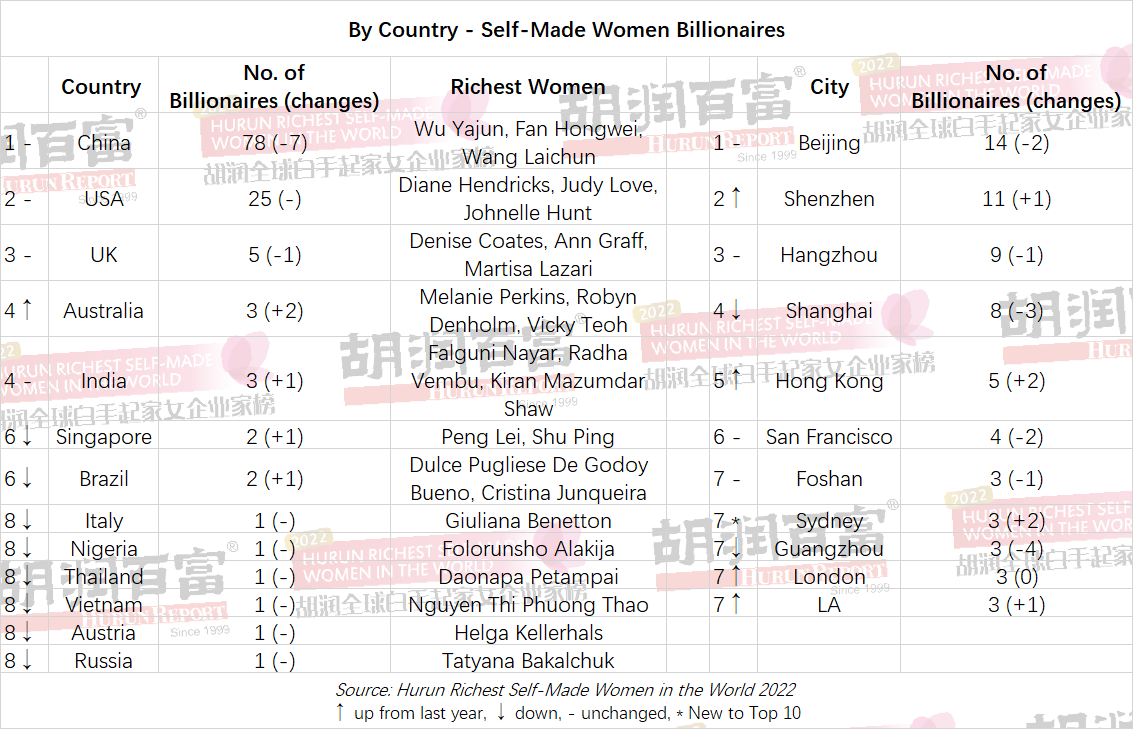 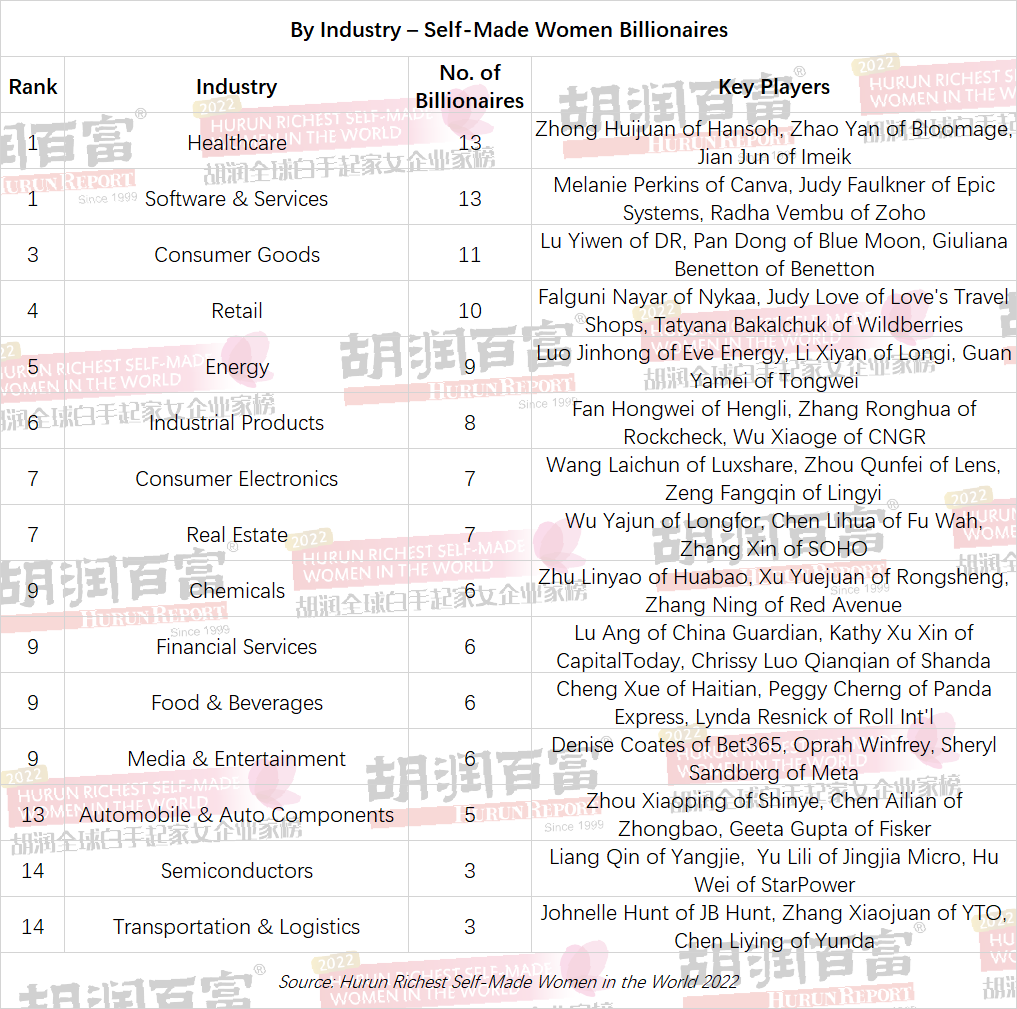 Lu Yiwen, 35, of Shenzhen-based Chinese diamond retailer DR shot straight into the list with US$6.2bn. Lu set up DR in 2010 together with husband Zhang Guotao, when they were 23 and 25, originally specializing in engagement rings, with a catchy marketing campaign that ‘men can only customize one DR in their lifetime’. Today DR has over 400 stores.

LA-based celebrity Kim Kardashian, 41, of KKW Beauty made the list for the first time with US$2bn on the back of her beauty brand. Last year, Kardashian continued to grow KKW Beauty, but it was her divorce from rapper Kanye West, 44, that really caught the headlines.

LA-based Barbadian singer Rihanna, 34, of Fenty Beauty, debuted this year with US$1bn. She is the wealthiest female musician and the second richest female entertainer after Oprah.

Melanie Perkins, 34, of Sydney-based US$40bn graphic design business Canva is the third youngest self-made woman billionaire in the world with US$6bn. Perkins started Canva together with husband Cliff Obrecht, and has grown Canva to become the 6th most valuable unicorn in the world, according to Hurun Global Unicorn Index 2021, able to compete with giants such as Microsoft and Abode. Perkins and Obrecht decided to give 30% of Canva to a charity that aims to eliminate poverty.

Despite the Russia Ukraine war, Moscow-based Tatyana Bakalchuk, 46, of Russia’s largest online retailer Wildberries, saw her wealth up another US$2.4bn or 75% to US$5.6bn. In 2004, while on maternity leave, Bakalchuk founded Wildberries from her Moscow flat with savings of US$700 and has since expanded to Belarus, Kazakhstan, Kyrgyzstan and Armenia.

With US$3.9bn, Radha Vembu, 49, of Zoho is the third richest self-made woman billionaire in India. Vembu is product manager of Zoho, a company she founded with her brother.

Palo Alto-based India-born Neha Narkhede, 37, of software company Confluent. Narkhede started out with Oracle and LinkedIn, before setting up Confluent in 2014.

Texas-based Whitney Wolfe Herd, 32, of dating app Bumble is the youngest self-made woman billionaire. Marketed as allowing women to make the first move, Bumble is now worth US$5.8bn and currently trading below its IPO price as the company reported a decline in its paying customers.

Australia-based Robyn Denholm, 58, broke into the Hurun Global Rich List for the first time with US$1bn. Since Denholm was appointed chair of the board in 2018, Tesla’s market capitalization increased nearly 18 times.

San Francisco-based Jayshree Ullal, 61, of Arista Networks, a cloud networking company, is the fifth richest self-made women billionaire in the USA with US$1.9bn. Ullal left Cisco to become CEO of Arista Networks in 2008. Since its IPO in 2014, Arista Networks reported a share price increase of ten times.

64 saw their wealth increase, of which 19 were new faces. 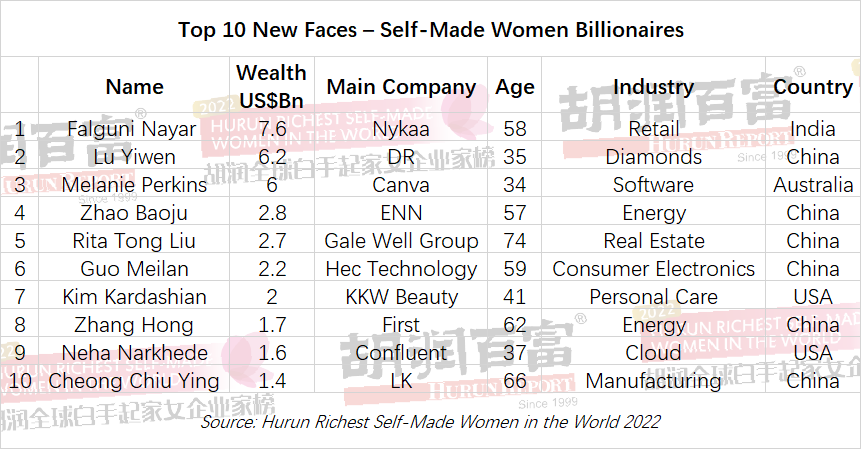 85 people saw their wealth go down or stay the same, of which 25 dropped out.

The biggest losses of the year were almost all in China.  Zhong Huijuan lost US$13bn, as generic drug makers took a hit, Lu Zhongfang was down US$12bn as education stocks were pummeled and Wang Ying was down on the back of increased competition for vaping.

South Korea-based Yoo Jung Hyun dropped off, after the death of her husband Kim Jung-ju aged 54 in February. 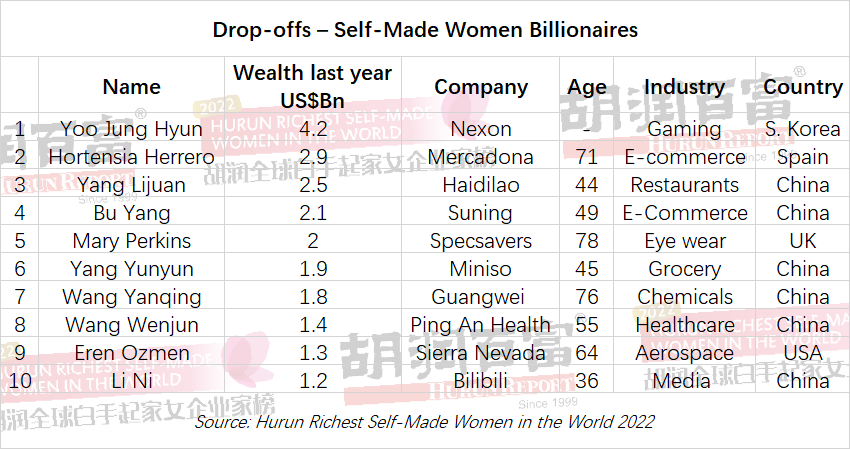 Who are the Youngest?

12 are self-made women billionaires under the age of 45. 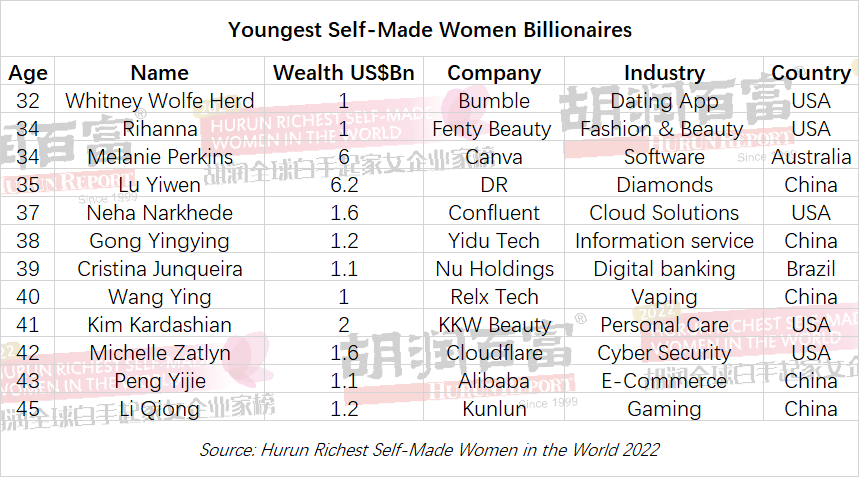 Overall, there are 2343 self-made billionaire men, with a total wealth of US$10.5tn.

By age, the men were 66yrs and the women 59yrs on average. 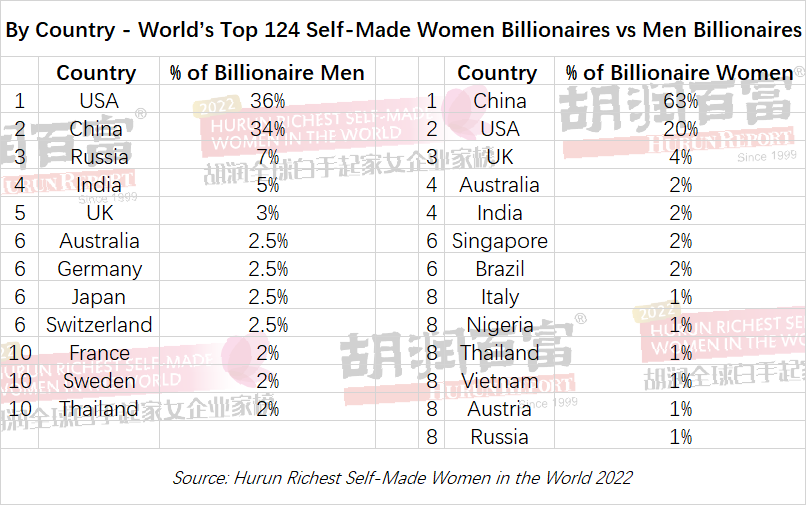 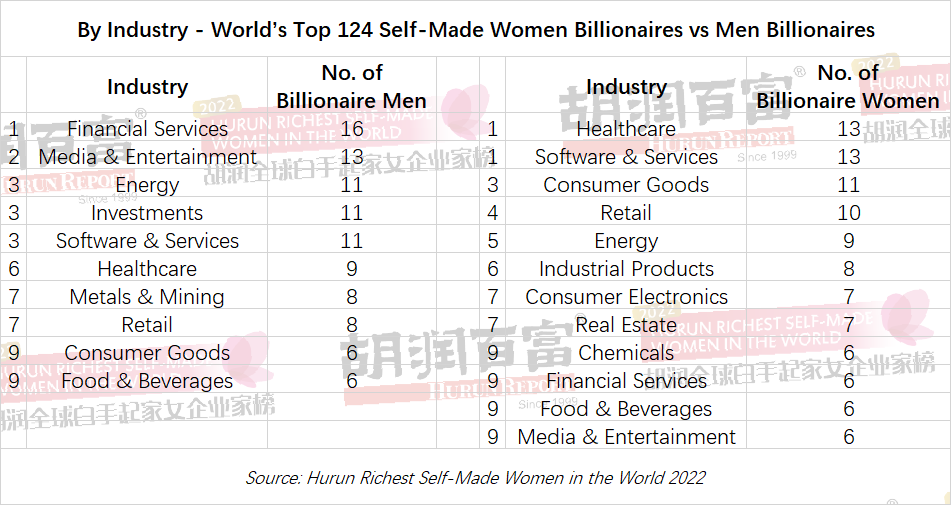 L'Oreal’s Francoise Bettencourt Meyers, 68, overtook Alice Walton, 72, of Walmart for the title of Richest Woman in the World. Third was MacKenzie Scott of Amazon. 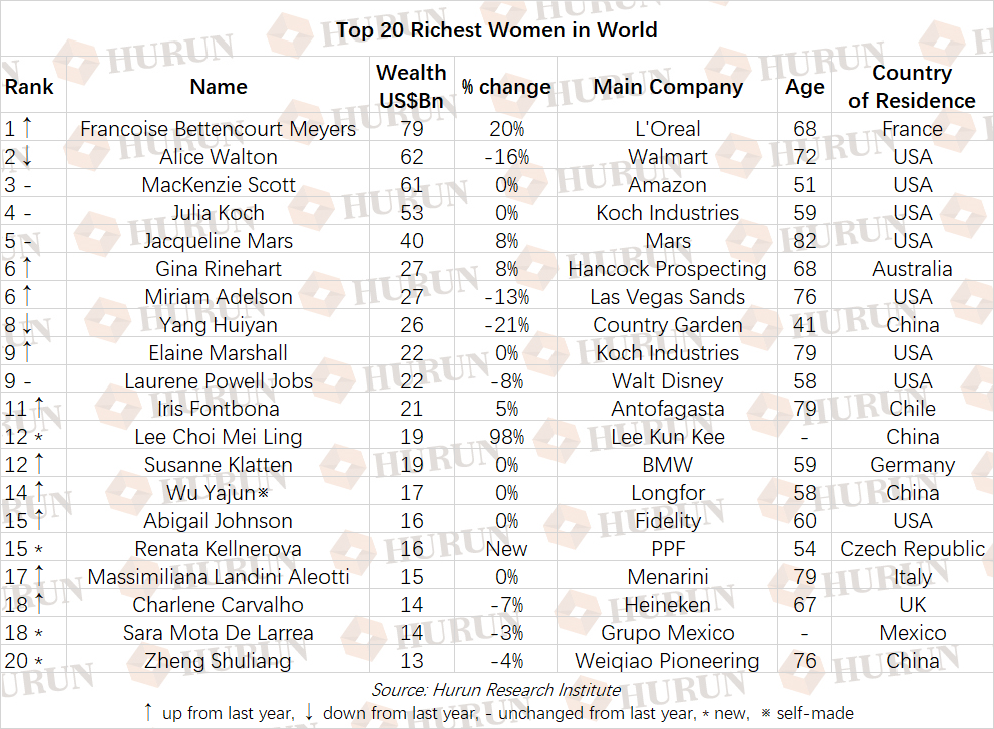 Compared with 5 years and 10 years ago

The cut-off to the Top 10 has tripled in the last 5 years and gone up by five times in the last ten years. Only Wu Yajun, Chen Lihua and Zhou Qunfei still make the Top 10 after 10 years.

Wealth valuations are from 14 January, from the Hurun Global Rich List 2022, released on 17 March 2022. Putting together this list of the world’s most successful women in business is always a challenge. For many spouses of billionaires, the shares are owned in the husband’s name, such as Mark Zuckerberg, but the donations are done in both the names of the spouses.  For the purpose of this list, we have separated out the wealth of the women.  In the case of Robin Li Yanhong and Melissa Ma Dongmin of Chinese search engine Baidu, for example, we can see the individual shareholding of Melissa Ma, so we have valued her independently.  In the case of Peggy and Andrew Cherng, we can see both their names on the shareholdings but are not able to determine their value independently, so we have assumed they own 50% each.