The Hurun Research Institute today, in association with Asia’s leading homestay operator Sweetome Group, released the Sweetome Hurun Global House Price Index 2020, a list of the 50 cities with the highest house price changes in the twelve months to 31 December 2020.

St. Petersburg, Rotterdam and Berlin led 21 European cities that made the index

Yinchuan in Ningxia was the fastest riser in China, up 14.2%, only Chinese city in Top 10. Seven Chinese cities, down from 27 last year, made index. Others included Tangshan, Xuzhou, Xining, Jining, Huizhou and Jinzhou.

Seattle and Bangkok back into the index

Rotterdam provided the highest return on overseas property investment, up 21.2% in the past year, topping the Sweetome Hurun China HNWI Global Property ROI 2020 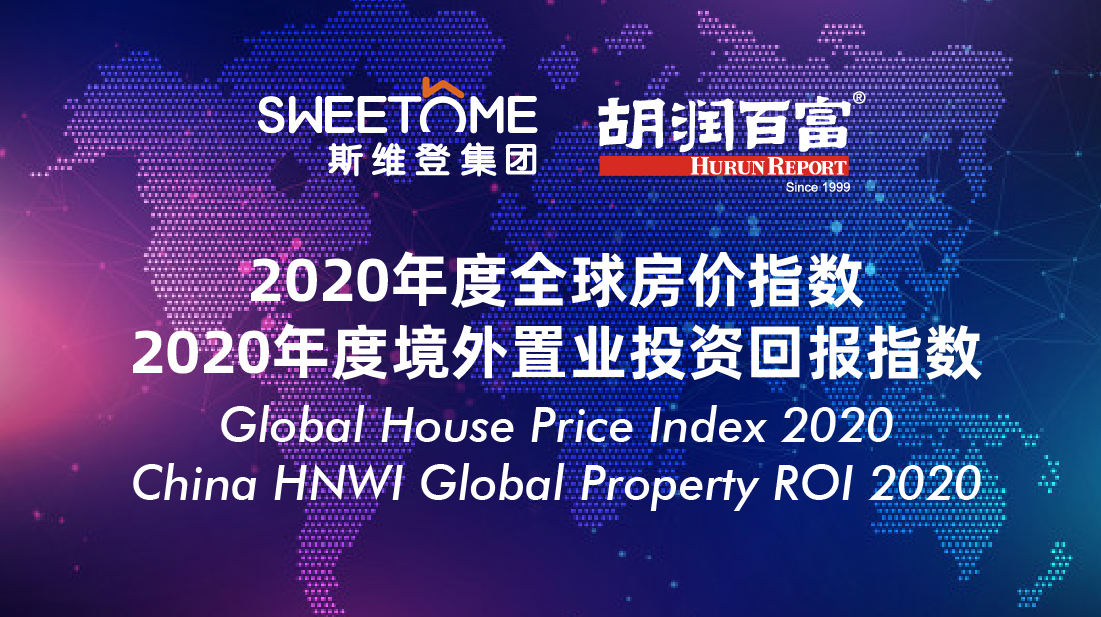 Of the Top 50 cities with the highest house price increases in the world over the past year, 30 of them rose more than 10%, 4 more than last year. The cut-off to make the list was a 7% rise.

Despite global property prices rising, the return on investment from overseas property for investors from China was not as good as last year, largely due to the appreciation of the Chinese yuan. Among the Top 50 cities with the highest return on investment, only 3 returned more than 20%, 2 less than last year. The highest rate of return was 21.8%, compared with 31.1% last year.

Rupert Hoogewerf, Chairman and Chief Researcher of Hurun Report said: “House prices have risen, mainly on the back of the world’s central banks printing a huge amount of money to keep the financial system functioning and help the economy cope with the fall-out from Covid-19.”

“Istanbul may have seen the fastest growth in housing prices, but at the expense of a sharp drop in the value of the Turkish Lira.”

“Government policies in China have managed to slow down the growth of property prices, with only seven Chinese cities making the Top 50 cities with the fastest property price increases, compared with 27 last year.”

“I am delighted to publish the Hurun Global House Price Index with Asia’s leading homestay operator Sweetome Group again. I hope this index will help more people choose which cities to buy houses in, especially from an investment return perspective.”

“In a year dominated by Covid-19, residential property is the investment of choice for China’s high net worth individuals, with 15% of respondents to a recent Hurun survey saying they were looking to increase their investment in residential.”

“China's economy has outperformed the rest of the world in the past year. The number of wealthy households in China with the equivalent of US$1 million of assets exceeded 5 million households for the first time, according to the FOTILE·Hurun Wealth Report 2020. 47% of respondents believed that domestic real estate prices will increase steadily.”

Justin Luo Jun, Co-founder of Tujia and Sweetome Group, said: “Despite Covid-19, global housing prices have increased. Sweetome recommends to investors to focus on the long-term and stable rental returns of the real estate industry, no matter whether domestic or international property. This is the fifth consecutive time that Sweetome Group and Hurun Research Institute jointly released the Sweetome Hurun Global House Price Index and the Sweetome Hurun China HNWI Global Property ROI. Sweetome operates and manages more than 60,000 houses in more than 280 destinations worldwide. We have an international-level solution for real estate value-added and income-increasing, which helps owners share the fragmented time of unused houses, obtain continuous rental income, and maintain and add value to assets.”

Istanbul’s house prices rose fastest in the world, up 23.3% in the past year, followed by Canada's Ottawa-Gatineau region and Halifax, up 18.7% and 16.3%.

The Top 50 cities were from 19 countries, led by the US with 11, followed by China, with 7. Canada and Germany ranked 3rd, with 5 each. France ranked 5th, with 4. Sweden, Thailand, the Netherlands and New Zealand each have 2. The UK, South Korea, Russia, Turkey, Austria, Slovakia, Poland, Bulgaria, Luxembourg and Croatia each have 1.

A total of 21 European cities on the list, with Germany, France, Sweden and the Netherlands among the countries where prices rose faster last year. St Petersburg continued to outperform, with the fourth-highest price increase in the world, up 3 places on the same period last year. New to the Top 10 is Rotterdam, ranked 8th. Budapest, which was topped the list last year, dropped out of the Top 50.

North America has 16 cities on the list. The US has 6 cities on the list this year, with the highest-ranked city, San Jose, ranked 6th. 5 Canadian cities made the list, 4 of them in the Top 10, with the Ottawa-Gatineau region ranked 2nd, Halifax ranked 3rd, Hamilton ranked 7th and Montreal ranked 8th.

The Oceania region has two cities on the list and one in the Top 10, Wellington.

Rotterdam has become the city with the highest return on overseas investment, followed by Malmo and Ottawa-Gatineau.

The Top 50 cities with the highest return on investment come from 24 countries, of which the US and Germany led by 6 cities each; followed by France, Australia and Canada each had 5; The Netherlands has 3; Sweden and New Zealand have 2 each; The UK, Italy, Poland, Denmark, Austria, Belgium, Luxembourg, Croatia, Malta, Bulgaria, Greece, Slovakia, Estonia, South Korea, Turkey and Thailand each have 1.

There are 30 European cities on the list, 16 of which new to the list. Rotterdam, new to the list, jumped to the top of the list with a return of 21.2% over the past year. Sweden's Malmo ranked 2nd and Stockholm ranked 5th, with the Swedish krona rising 6.7% against the RMB over the past year, even as the CNY strengthened. In addition, Utrecht, Luxembourg, Hannover and Lyon have all entered the Top 10. Hoogewerf said: "In the past year, European countries have higher rates of return on property investment, mainly due to rising housing prices and appreciation of the Euro against the Chinese yuan."

North America has 12 cities on the list, with 4 new to the list. Canada performed better on average than the United States. The Ottawa-Gatineau region ranked 3rd, up 2 places from last year. Halifax entered the Top 10. The best performing city in the United States is San Jose, ranked 21st.

6 cities from the Oceania region made the list, including 4 from Australia and 2 from New Zealand. Wellington entered the Top 10, ranked 4th, up 25 places from last year.

Bali has seen house prices fall 25% in the past year while rental yields rise 9%.

Residential is still the top investment choice to increase in the next three years, but overseas investment is not expected

Residential remains the most important future investment destination for HNWI individuals, with 15% of respondents choosing to increase their residential investment in the next three years, down 8% from last year. And 47% of respondents think domestic property prices will grow steadily in the next two years, up 3% from last year. While, the proportion of future overseas investments fell sharply, ranked first among the investments to be reduced over the next three years. (according to Hurun China Luxury Consumer Survey 2021)

The most popular tourist destinations

Japan, Switzerland, Maldives, and France continue to rank in the Top 4 most popular international tourist destinations for high-net-worth individuals. Among them, Japan continued to be the most popular international tourist destination, but the proportion dropped by 3%. Switzerland ranked second, with the proportion rising by 10%. Among them, women favor Switzerland significantly higher than men, reaching 47%, and men are 29%. In addition, people under the age of 30 favor Switzerland significantly higher than other age groups, with a proportion of 45%. The Maldives still maintains a stable attractiveness to high-net-worth individuals, ranked third. But in the female group, France surpassed Maldives in third.

The most popular destination for studying abroad

The United Kingdom (46%) surpassed the United States for the first time as the most popular study destination for high-net-worth individuals. The proportion of the United States dropped from 54% to 43%, dropping to second place. Switzerland and Germany replaced Australia and Canada last year, ranked third and fourth (according to Hurun China Luxury Consumer Survey 2021).

Sweetome Hurun Global House Price Index 2020 surveyed 179 cities that are favored by China's high net worth individuals, made up of 70 cities from mainland China (first- and second-tier cities and some popular tourist cities such as Sanya) and 109 cities outside mainland China, which are popular with China's high-net-worth individuals. Of the 109 overseas cities, 51 are European capitals and major cities, including 8 from the UK, 6 from Germany and 6 from France; 23 in the US; 7 in Canada; 19 in Asia; 5 in Australia; 2 in New Zealand; 1 in Africa and 1 in South America.

* The information in this article is for reference only, investors operate on the basis of risk.

As the world's leading sharing accommodation operation and management group, Sweetome is committed to providing a maintenance and profit model for high-quality, chain-orientation idle assets including apartments, villas, and stylish homestays. Sweetome was derived from China’s largest “Unicorn” vacation rental booking platform Tujia which was founded in 2011.

Meanwhile, Sweetome provides house owners with standard in-house maintenance service and promising earnings. Sweetome has reached strategic cooperation with over 200 domestic government agencies and most of the TOP100 real estate developers to exploring over 1 million manageable properties. Since 2018, Sweetome has speeded up its oversea expansion to Australia, Canada, Cambodia, the United States, Greece and Thailand.