The Hurun Research Institute released the Hurun China New Energy Cities 2022, a list of the Top 50 cities in China with the highest concentration of new energy companies. This is the first year of the list.

NANJING, SUZHOU, GUANGZHOU, CHENGDU AND HEFEI ROUND OUT TOP 10

EAST CHINA HAS MOST CITIES ON LIST, WITH 26, ACCOUNTING FOR MORE THAN HALF OF HURUN TOP 50

JIANGSU, WITH 10 CITIES, IS PROVINCE WITH HIGHEST CONCENTRATION OF NEW ENERGY INDUSTRY. CHANGZHOU, NANJING AND SUZHOU ALL IN TOP 10 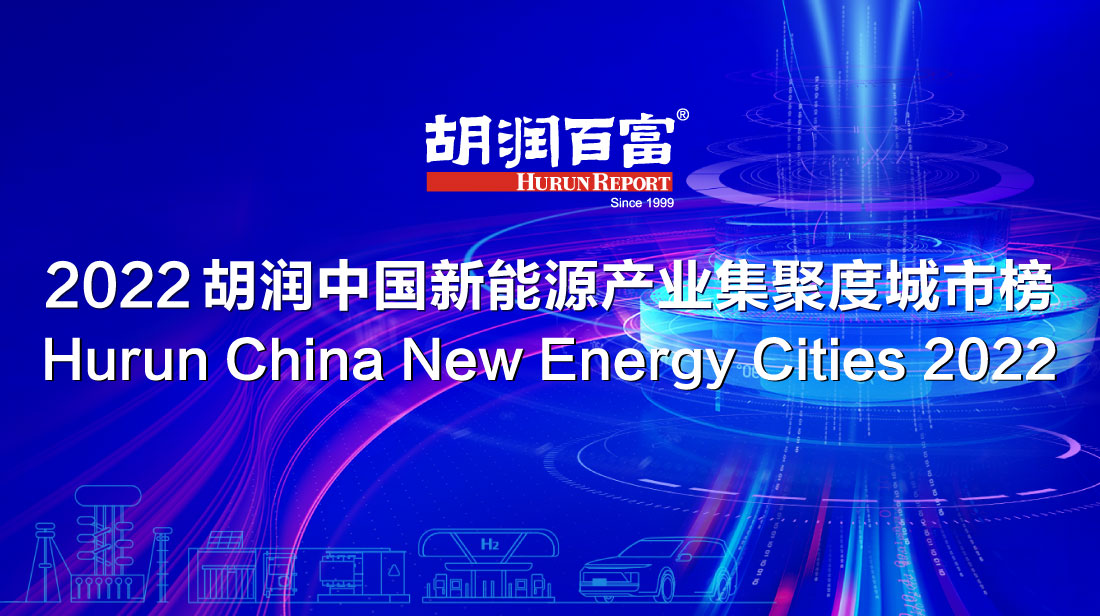 (11 November 2022, Changzhou) The Hurun Research Institute released the Hurun China New Energy Cities 2022, a list of the Top 50 cities in China with the highest concentration of new energy companies. This is the first year of the list.

Rupert Hoogewerf, Hurun Report Chairman and Chief Researcher, said: “Over the next two decades, China's economy is expected to continue its rapid industrialization and urbanization, with the upgrading of consumption driving a shift in industrial structure. Future economic growth cannot be achieved without the support of adequate energy supply. At present, the traditional energy resources that can be developed are limited. Under the goal of ‘dual carbon targets’, China's future economic development cannot be separated from the development of the new energy industry.”

“East China is leading the country when it comes to new energy, with 26 of the Hurun Top 50 cities. Within East China, Jiangsu leads the way, led by three cities in the Top 10: Changzhou, Nanjing and Suzhou.”

Changzhou is one of the birthplace of modern Chinese industry, and one of the founders of the South Jiangsu model. Of 41 industrial categories, 207 intermediate categories and 666 sub-categories, Changzhou has 37, 191 and 600, respectively. Manufacturing is the city's brightest feature, biggest advantage and strongest competitiveness. In recent years, Changzhou has closely adhered to the position of "famous international intelligent manufacturing city and central axis hub of Yangtze River Delta". Relying on the industrial advantages of good foundation, full range of categories and strong resilience, Changzhou has seized the opportunities of "new" industries and gradually built a "great cycle" development pattern of new energy industry with "development, storage, delivery and use" as the key links.

At the power generation end, Changzhou is dominated by the solar photovoltaic industry, which has a complete construction and covers all production and manufacturing links except polysilicon materials. The scale ranks among the top in China, with the annual output of batteries and modules accounting for about 10% of the country. At the transmission end, Changzhou mainly focuses on the intelligent power equipment industry. As the largest UHV power transmission and transformation equipment manufacturing base in China, Changzhou enjoys the title of "Transformer Capital of the World". Its product structure covers various models, and its market share ranks the first in China. At the application end, Changzhou is dominated by the new energy automobile industry. In recent years, Changzhou has introduced a number of new energy vehicle and core parts production enterprises. With the growth and expansion of auto parts enterprises with original advantages, Changzhou has become an important industrial agglomeration area of new energy vehicles and parts in Jiangsu Province, with the production and sales volume of new energy vehicles accounting for half of the province.

Located in the front of the Pearl River Delta, Shenzhen is a link and bridge between Hong Kong and mainland China. It plays an important role in China's high-tech industry, financial services, foreign trade and export, marine transportation, creative culture and other aspects.

Shanghai is the core city of the Yangtze River Delta integration. China has strategically positioned Shanghai as an international financial, economic, trade and shipping center as well as a global center for scientific and technological innovation.

Wuhan is the central city in central China, and is the largest inland water, land and air transportation hub.

Changzhou is one of the central cities in the Yangtze River Delta. In the early stage of reform and opening up, Changzhou built an industrial system featuring the ‘nine Dragons’ and is well-known as among the first ‘rising industrial star’ cities in China.

Jiangsu, Guangdong and Shandong made up the top three. Jiangsu has the most cities on the list with 10, accounting for one-fifth of the list, followed by Guangdong with 7 cities and Shandong was third with 6 cities. 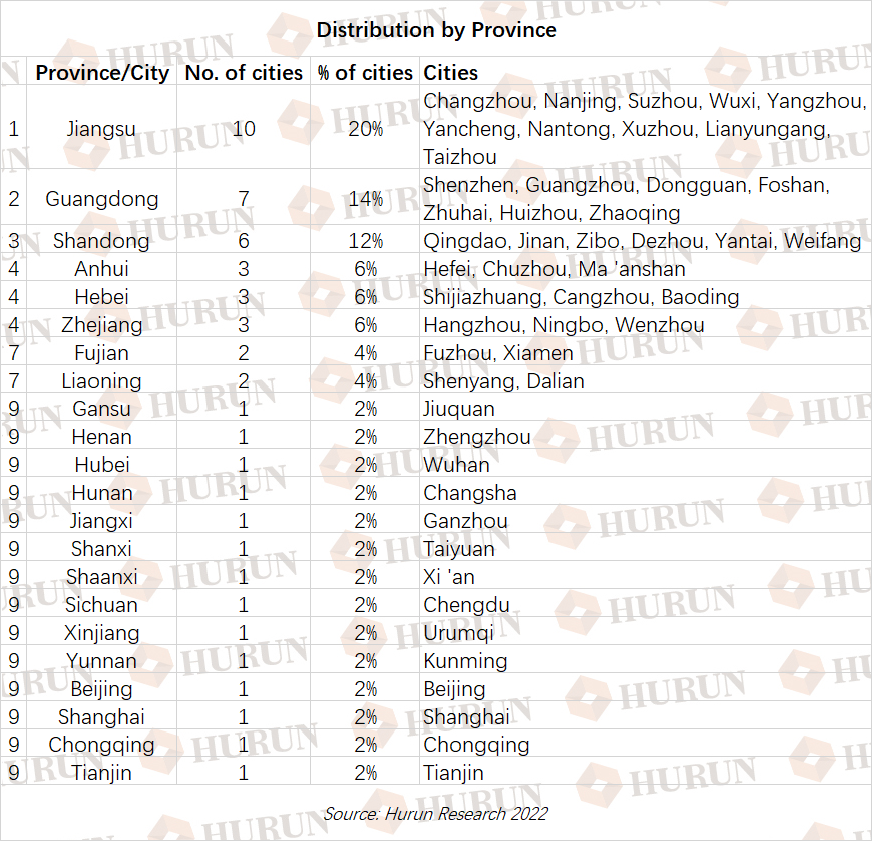 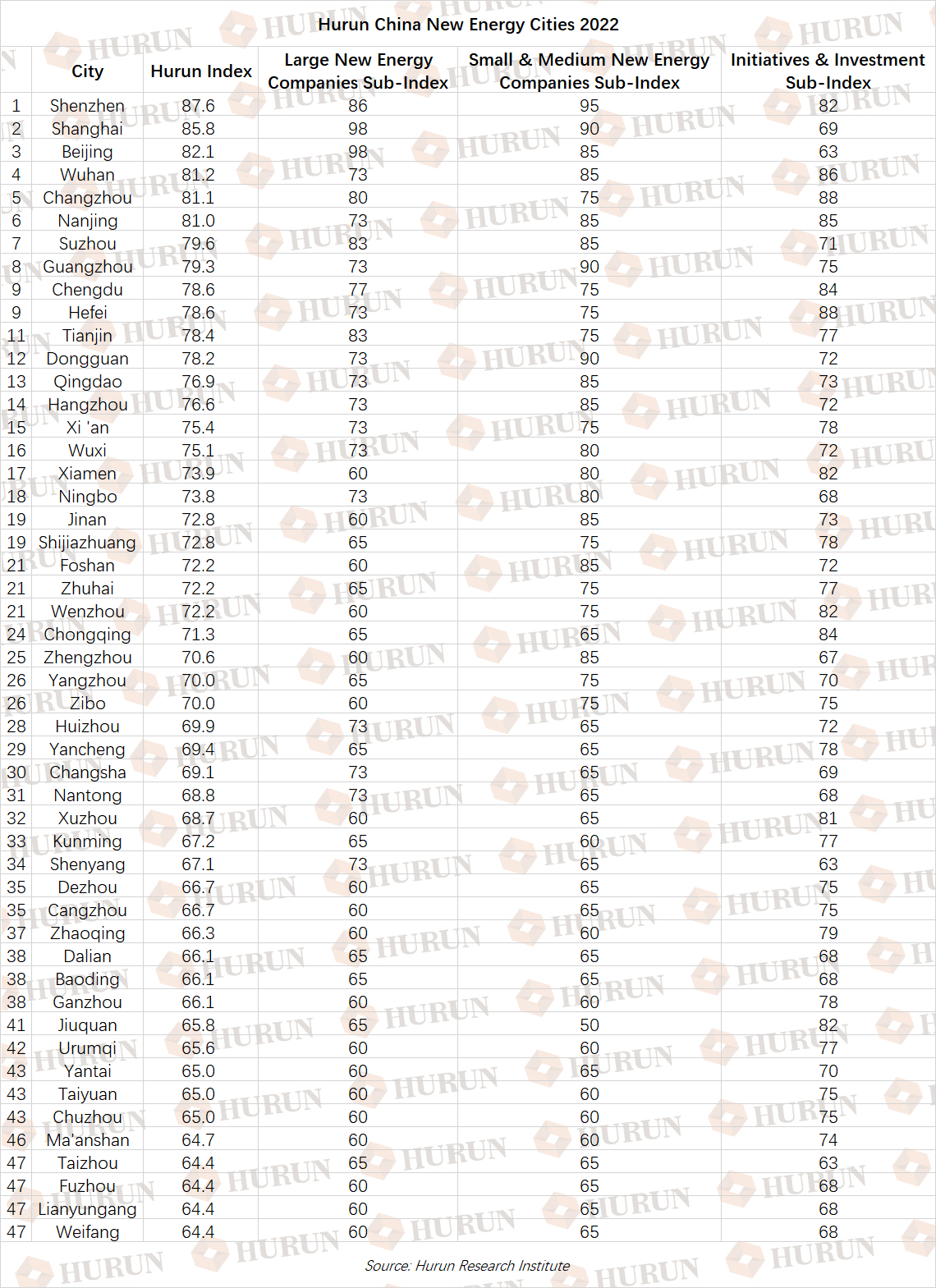