Tencent grows 75% or US$300bn to become China’s most valuable private company with a market cap of US$743bn, overtaking last year’s Number One Alibaba

The Hurun China 500 rose by 55%, to hit US$16bn of value on average, a new record. 84 companies saw their value double with five companies growing by over US$100bn in the last year, led by Tencent and followed by Meituan, Alibaba, Pinduoduo and JD

Two e-commerce platforms broke into the Top 10 for the first time, led by Pinduoduo and JD, up 4 times and 3 times respectively

E-cars, entertainment and education are the three industries with the fastest growth this year

BYD and Weilai led the car industry, breaking into the Top 20 with valuations of US$60bn+

The Hurun Top 10 was worth US$2.8 trillion, up three-fold in five years and 10-fold that of ten years ago

Half of the Hurun China 500 companies are concentrated in the four cities of Beijing, Shanghai, Shenzhen and Hangzhou. Beijing is still the city with the most Top 500 companies, with 93

Total sales of the Hurun China 500 last year were US$3.3tn, equivalent to 1/5th of China's GDP last year. The average sales was US$6.6bn.

The Shanghai Stock Exchange has become the preferred listing exchange for the Top 500, with 121 companies, followed by the Hong Kong Stock Exchange, with 96. 34 companies are listed in the United States

10% of the companies on the list do not have entrepreneurs on the Hurun China Rich List 2020, such as Ping An, Haier Smart Home and Lufax 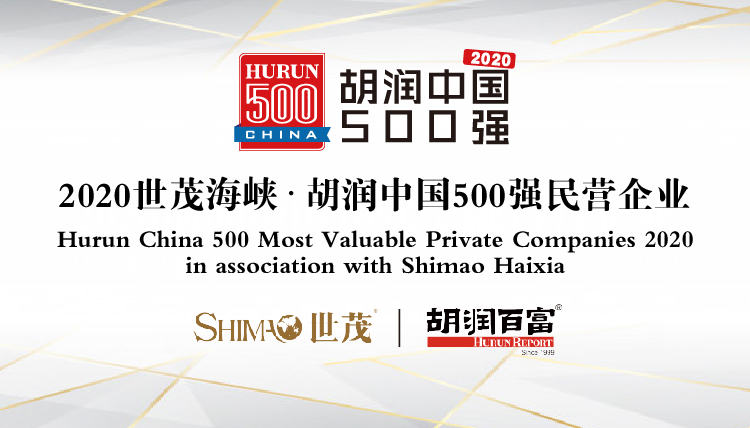 (25 November 2020, Foshan) The Hurun Research Institute in association with leading real estate platform Shimao Haixia today released the Hurun China 500 Most Valuable Private Companies 2020, a list of the Top 500 Chinese private enterprises ranked according to their market value. ‘Chinese private enterprises’ here refers to non-state-controlled enterprises with headquarters in mainland China. The market value of listed companies is calculated based on the closing price on 15 October 2020. The valuation of non-listed companies is estimated with reference to listed companies from the same industry. This is the second time the Hurun Research Institute has released this list.

Rupert Hoogewerf, chairman and chief researcher of Hurun said: “It is really not easy to make the Hurun China 500. The threshold this year was US$1.4 billion higher than last year, reaching US$3.4 billion, and yet there were still 120 companies new to the list. The average value of the top 500 was up 55%, hitting US$16.5 billion. That’s a pretty serious business. The main reasons for the rapid increase were the rise of the new economy especially after the pandemic, a sharp rise in the stock markets, and a flurry of new listings.”

Both the Nasdaq and Shenzhen Component Index rose by more than 40% year on year, whilst the Shanghai Stock Exchange Composite Index was up 11% over the same period last year.

“It’s all about value creation not sales. Some of the Hurun China 500, for example, made only relatively small revenues, but created massive shareholder value. For example, Pinduoduo, whose sales were only US$4.4 billion last year, was worth US$170 billion. Some companies have high sales, while their market value is relatively small. For example, China National Petroleum Corporation last year had sales of US$3.7 trillion, whilst its market value was less than US$120 billion.”

10 entrepreneurs own two or more companies in the Top 500

SHIMAO Haixia, the largest regional company under SHIMAO Group. Adhering to the brand concept of "To live up to dreams and responsibilities, create value for the times", it actively implements the group's diversified business models, deploying Real Estate Development, Hotel Management, Commercial operations, Cultural tourism of small town, Culture, Education, Technology, Health and other fields. After 17 years of steady development, it has been deeply deployed in Guangdong-Hong Kong-Macao Greater Bay Area, Haixia West Coast City Belt, Hainan Free Trade Port and other national core areas. Its territory (267 Projects of property development) covers 7 provinces and 2 municipalities across the country. With sales of 90 billion in 2019, it was selected as the first regional company in China by professional institutions.

Established in the UK in 1999, Hurun is a research, media and investments group, widely regarded as an influential opinion-leader in the world of business on the back of generating 4 billion views on the Hurun brand last year.