The Hurun Research Institute today released the Hurun China 500 Most Valuable Private Companies 2021, a list of the Top 500 China non-state-controlled enterprises ranked according to their value.

Tencent is officially the most valuable company in China, heading the Hurun China 500 with a valuation of US$609bn

Alibaba halved in value, dropping down one place to third

Battery-maker CATL shot up 6 places to break into the Top 10 for the first time at fifth place, with its value rising 2.5 times to US$233bn

34 companies more than doubled in value, led by Bytedance, CATL and Meituan

Traditional medicine and pharmaceutical retail, real estate and education were the biggest losers

By city. Shanghai was up 2 to 69, overtaking Beijing for the first time, as the city with the most Hurun China 500. Beijing was down 25 to 68, ranked second. Shenzhen remained 3rd with 45, followed by Hangzhou and Hong Kong with 30 each and Taipei with 24. Half of the Hurun China 500 are concentrated in these 6 cities.

176 companies made the Hurun China 500 for the first time, mainly from energy, chemicals and healthcare. 70 of these were from Taiwan and Hong Kong.

Together, the Hurun China 500 had annual sales of US$3.75tn and 11 million employees. Curiously, 24 have an annual revenue of less than US$150mn.

19 individuals founded or control more than one Hurun China 500, led by Li Ka-shing & family with 5 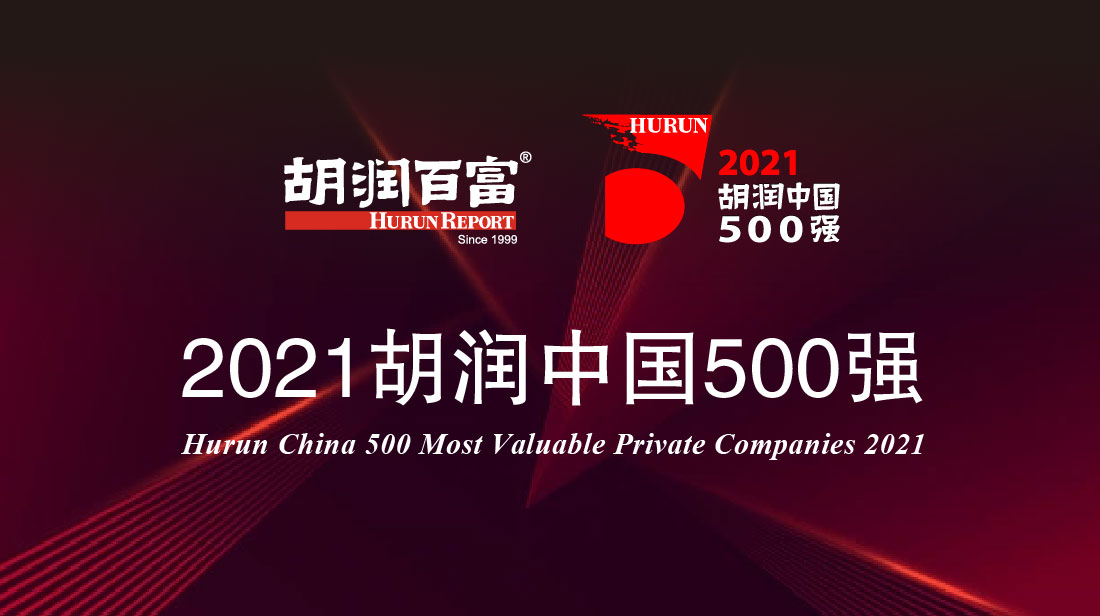 Hurun Report Chairman and Chief Researcher Rupert Hoogewerf said: “The companies from the Hurun China 500 are the ‘backbone’ of China's private sector, wielding significant economic influence. Between them, they have annual revenues of US$3.75tn, equivalent to a quarter of China's annual GDP and employ 11 million people. Despite the impact of Covid, they have still managed to grow, with their average value more than doubling to US$20bn since the pandemic started two years ago and their total value increasing by US$4.7tn to US$10.3tn.”

“This year, the threshold to make the Hurun China 500 was US$5bn, up 39% from last year and more than double that of two years ago. At this rate, the cut-off might well be closer to US$10bn in five years.”

“Which companies are up and which are down tell the story of the changes in the economy. Energy, chemical and healthcare industries rose rapidly, while traditional medicine and pharmaceutical retail, real estate and education led the list of companies that dropped off.”

“Since the outbreak of Covid, Alibaba and Ping An Insurance have seen their value drop by US$203bn and US$94bn.” 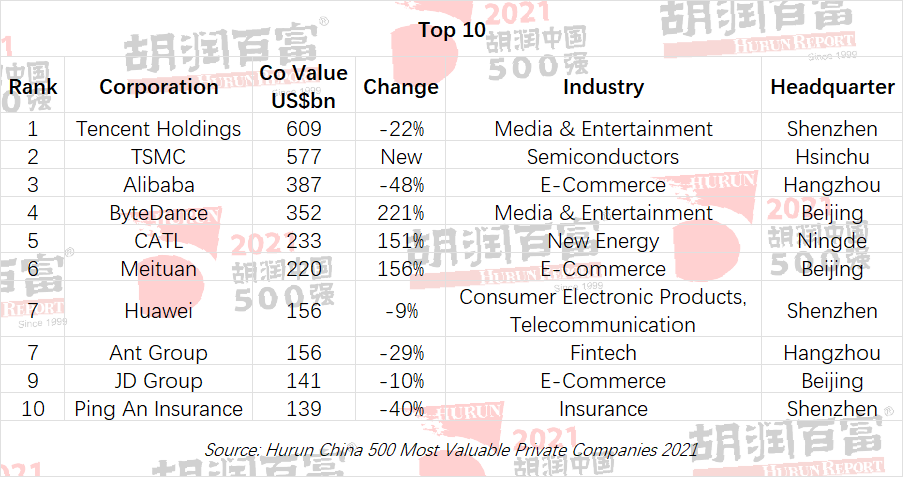 In terms of provinces, Guangdong ranked first with 87. This year, companies from Hong Kong, Macao and Taiwan were included. Guangxi, Hainan, Heilongjiang, Jilin, Tibet and Macau were the only places without a Hurun China 500. 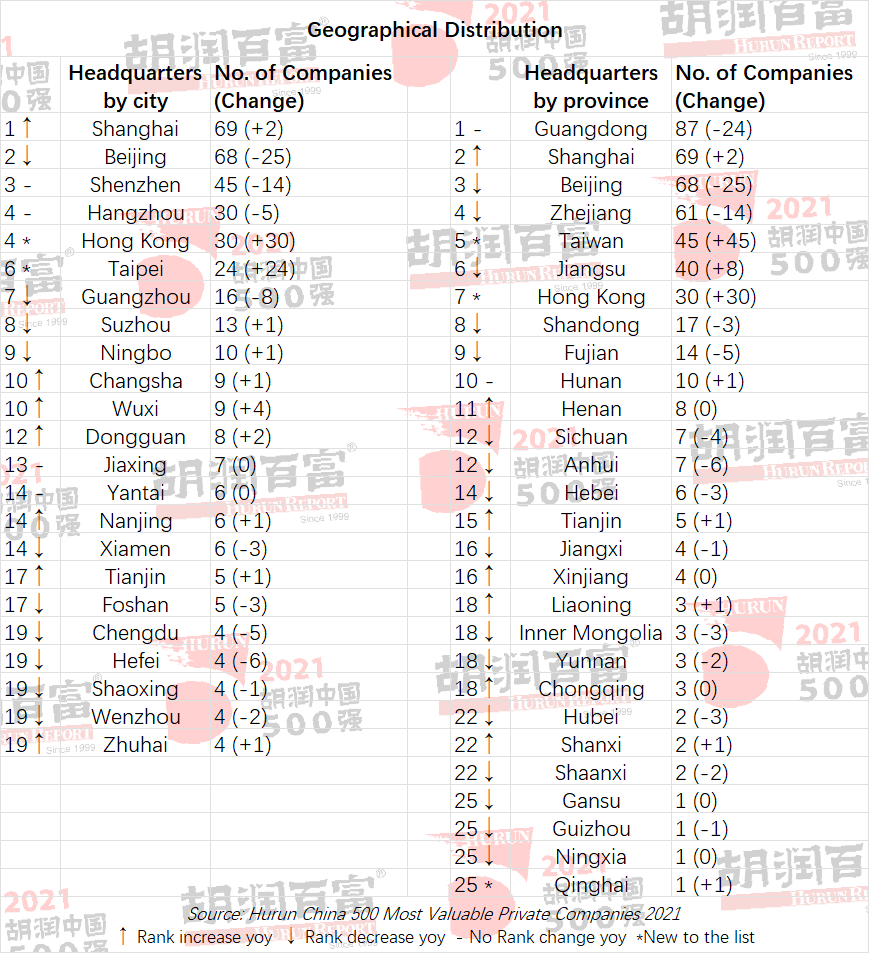 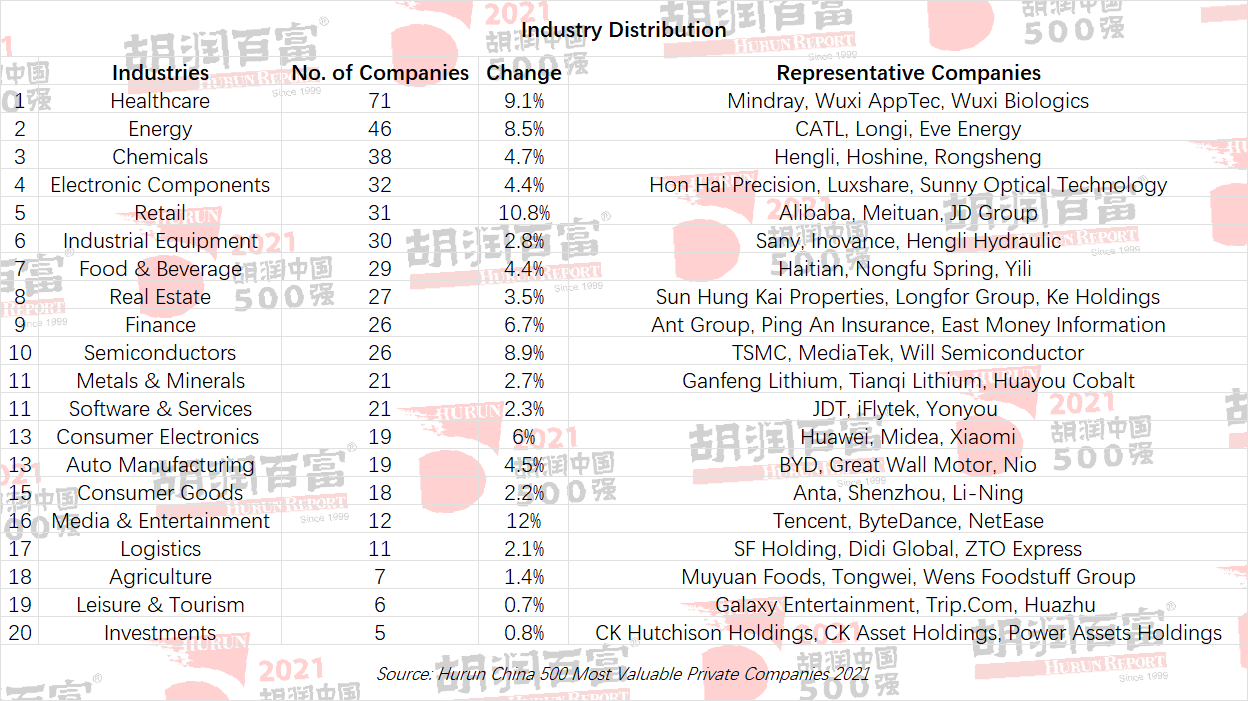 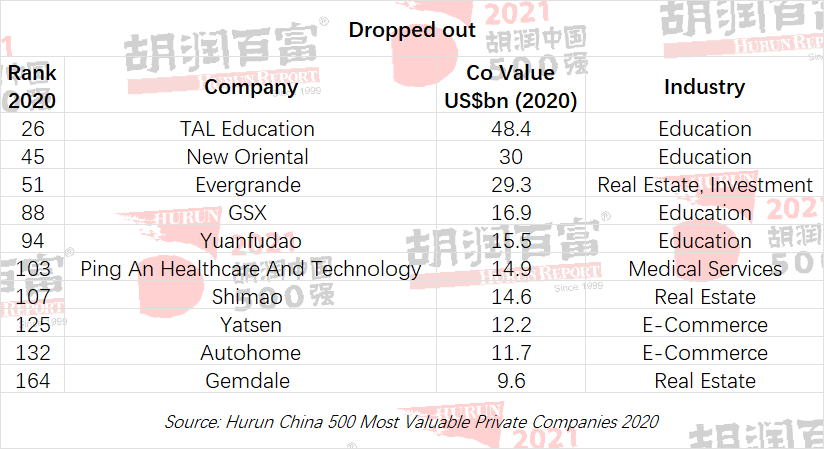 So, How much Revenues do they have?

And how many staff do they employ?