The Hurun Research Institute today launched the SICA·Hurun Global Art List 2021, a ranking of the Top 50 artists in the world alive today based on the sales of their works at public auction in the year ending 31 December 2020.

British artist David Hockney, 84, topped the Hurun Global Art List for the second year in a row with sales of his works at public auction last year amounting to US$132mn

Chinese painter Cui Ruzhuo, 77, shot up 8 places to 2nd with sales of his works more than doubling to US$113mn

The US led with 15 artists, the same number as last year, followed by China with 12, one more than last year. Third was the UK with 7 artists. Between them, the ‘Big Three’ countries accounted for 68% of the list.

Total sales of the works of the Top 50 artists from Hurun Global List came to US$1.4bn, a drop of 24% from last year

Of the 12 new faces, 4 were from China and 3 from the United States

The average age was 68 years old, the same as last year. 10 artists were 50 years or under, 3 more than last year 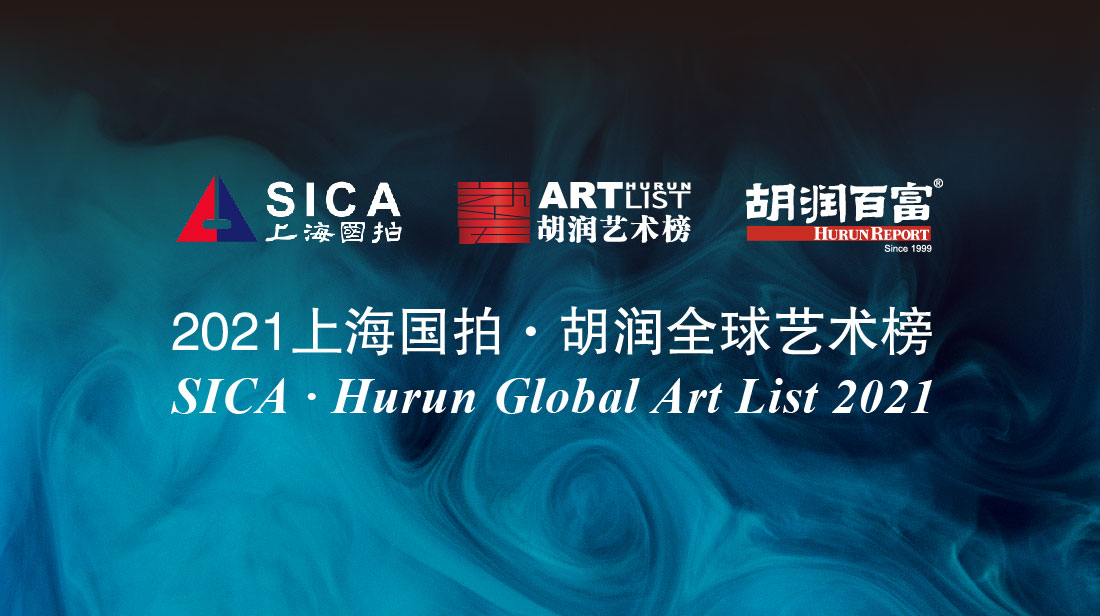 (29 November 2021, Shanghai) The Hurun Research Institute today launched the SICA·Hurun Global Art List 2021, a ranking of the Top 50 artists in the world alive today based on the sales of their works at public auction in the year ending 31 December 2020. This is the second year of the Hurun Global Art List.

For analysis purpose, the Hurun China Art List and Hurun India Art List are included in the appendix.

“Covid has had a big impact on the art market, with the works of the Hurun Top 50 living global artists only selling US$1.4bn at public auction last year, down 24%. However, this does not necessarily mean that the value of art works decreased, it may be because good works were not put up for auction by collectors last year.”

“It takes time for an artist to gain recognition from collectors on the secondary market. The average age of the artists on our list is 68. From this we can see they were born on average in 1953 and started attracting the attention of senior art collectors in the mid-nineties.”

“In terms of countries, the USA still led with the most number of artists, followed by China, UK, Japan and Germany. Curiously, traditional art powerhouses like France had only 1 artist on the list, while Italy had none. One reason perhaps is that the world’s leading art auction houses are based in New York, London, Hong Kong and Beijing.”

“For the first time, there are 2 Chinese artists that made the Top 10, with Cui Ruzhuo breaking into the Top 2 for the first time. 12 Chinese artists made the Top 50, 1 more than last year, including 4 new faces. The achievements of Chinese contemporary artists in the secondary market cannot be separated from the development of Chinese economy and the strong community of Chinese collectors. Influenced by China's profound cultural tradition, Chinese contemporary artists have experienced social changes, the development of globalization, and frequent international exchanges.”

Since its establishment in 1988, SICA has been leading the development of China's auction industry in its auction practice. So far, SICA has accumulated more than one million high-quality customer groups, and it is the leading enterprise of domestic comprehensive auction houses. In recent years, Shanghai has actively implemented the differentiated development strategy around the direction of innovation and transformation of internationalization, platformization, and specialization. Taking Shanghai's efforts to promote the construction of an international cultural metropolis as a historical opportunity, relying on the brand, technology, traffic and other aspects Advantages, to build an art complex on the Bund, efficiently connect art creation and market demand, and is committed to promoting the innovative development of Shanghai's cultural and creative industries, reflecting the cultural height that Shanghai should have.

Dai Peihua, chairman of SICA, said, “The key to building Shanghai into one of the world’s capitals for art is to enhance Shanghai's voice in the international art auction market. We at SICA have sought to lead the trend of global art development through research and the development of art indices, white papers and other measures. We are delighted to be working with leading research house Hurun Report to put out the second edition of the Global Art List.” 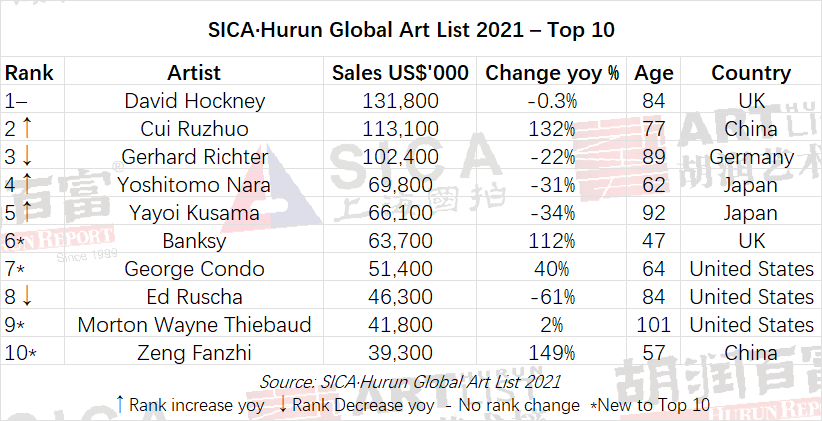 British artist David Hockney, 84, topped the list for the second year in a row with sales of his works at public auction last year totaling US$131.8mn. A total of 511 Hockney works were sold last year, the most expensive of which was his Nichols Canyon (1980), which sold for US$41mn at Phillips in New York. Hockney lives in Yorkshire, London and California.

Beijing-based Chinese painter Cui Ruzhuo, 77, shot up to 2nd, up eight places, with sales of his works more than doubling to US$113.1mn. Cui Ruzhuo's Landscape (2017) was sold by Yongle auction for US$27.5mn.

German artist Gerhard Richter, 89, ranked 3rd with US$102.4mn, down one place from last year. A total of 285 works by Richter were sold last year, and his abstract painting Abstraktes Bild sold for US$28mn at Sotheby's Hong Kong. His works vary in style, including romanticism, photorealism, abstract expressionism, minimalism and pop art.

Japanese artist Yoshitomo Nara, 62, ranked 4th with US$70mn, up two places from last year. A total of 391 works by Nara were sold last year, including his Hothouse Doll (in the white room - III) (1995), which sold for nearly US$13mn.

Banksy, a 47-year-old British street artist, ranked 6th with US$64mn, up 12 places from last year. He is the youngest artist in the Top 10. 966 works were sold last year, including his mock-satire Show Me The Monet, which sold for more than US$10mn at Sotheby's in London. Banksy is known for his satirical and playful art style, and his works can be found in streets around the world, often attracting people to stop and look at them.

American surrealist Artist George Condo, 64, was 7th with US$51mn, up seven places from last year. A total of 126 Condo works were sold last year. The most expensive work was Force Field, which sold for US$7mn at Christie's in Hong Kong. Condo's signature style is "mutant surrealism," often featuring extruded cartoon faces and some improvisational exaggerated cubism.

American pop artist Ed Ruscha, 84, ranked 8th with US$46mn, down five places from last year. Among 136 works sold last year, the most expensive was Annie, which sold for US$23mn at Christie's in New York. Annie is an early work by Ruscha. It is nearly six feet high, and such a large piece is an early example of the artist's iconic style.

American pop artist Morton Wayne Thiebaud, 101, ranked 9th with US$42mn, up four places from last year. Last year, 75 of his works sold, the most expensive of which was Four Pinball Machines, sold for US$19mn at Christie's in New York. His work has a strong pop art style, including thick Outlines and complete descriptions of objects.

The Hurun Top 50 came from 14 countries, with Ghana, Latvia and Switzerland making the list for the first time. 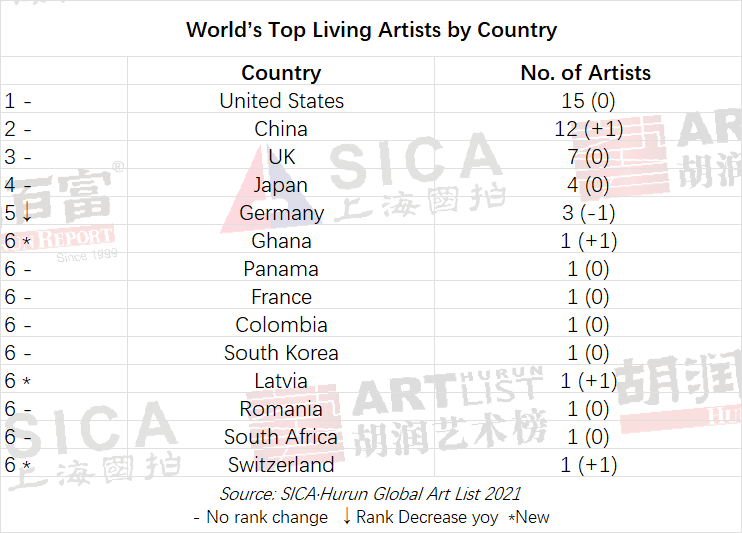 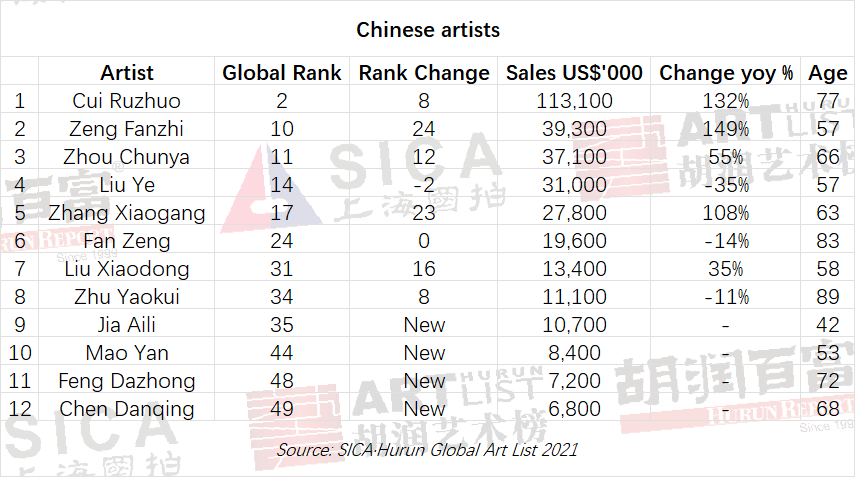 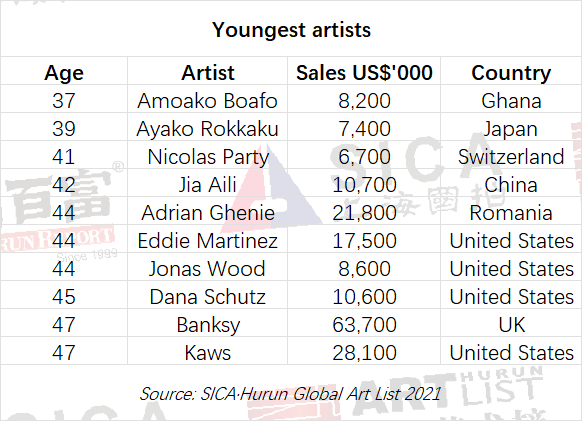 Table: Most Expensive Artwork sold at auction by living artists in the past year 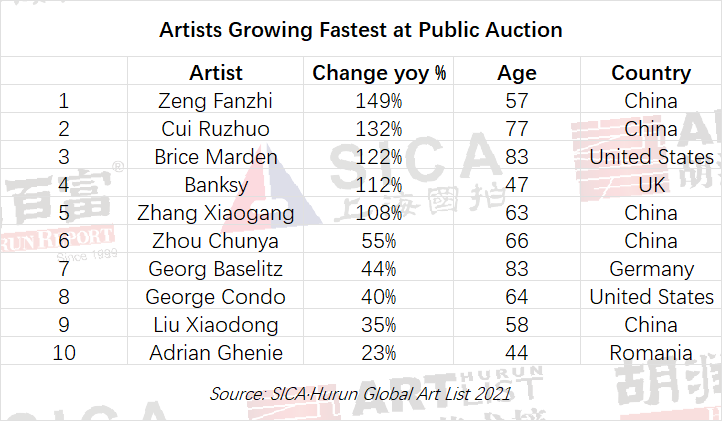 Top 5 artists on the list with the least works sold 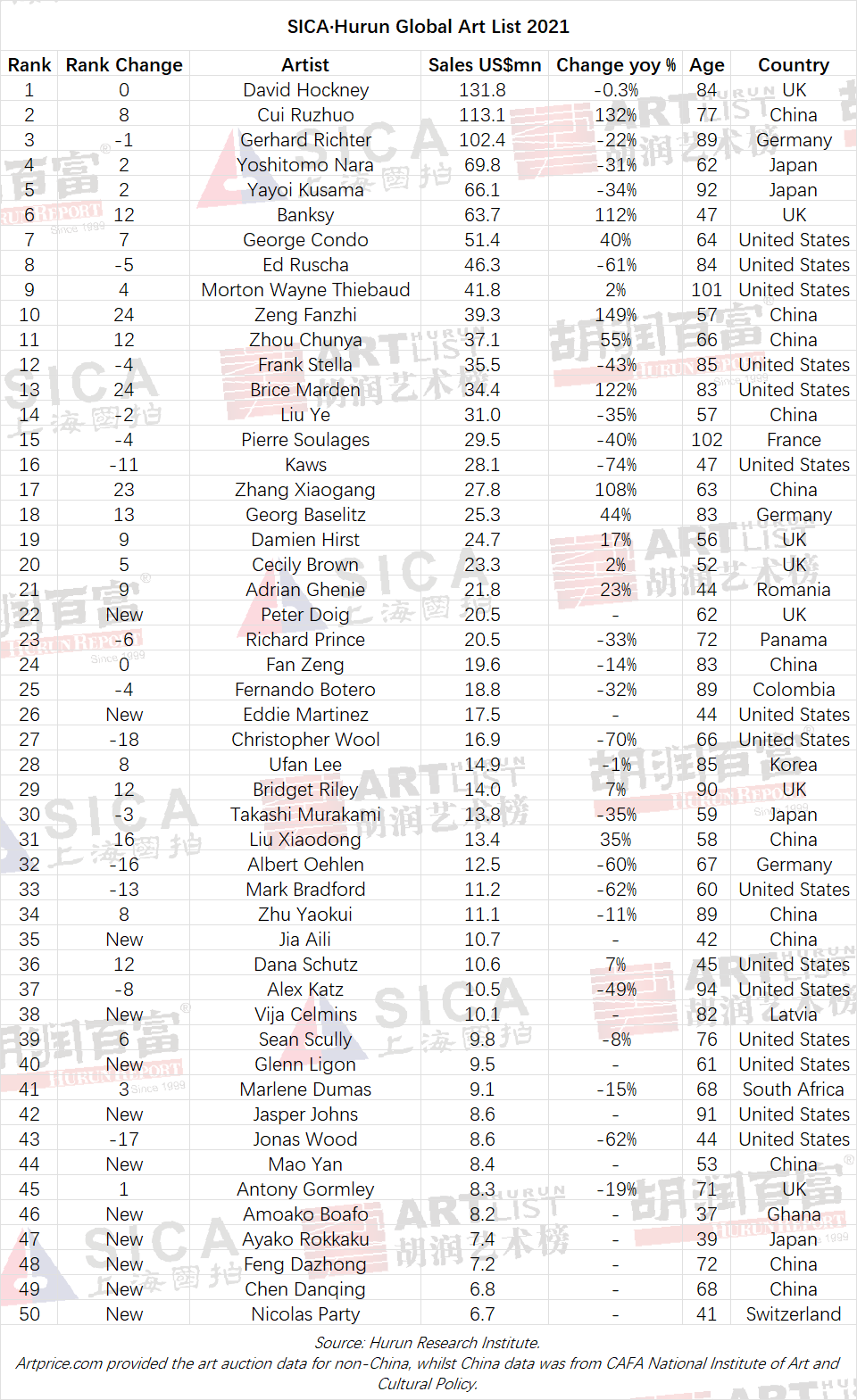 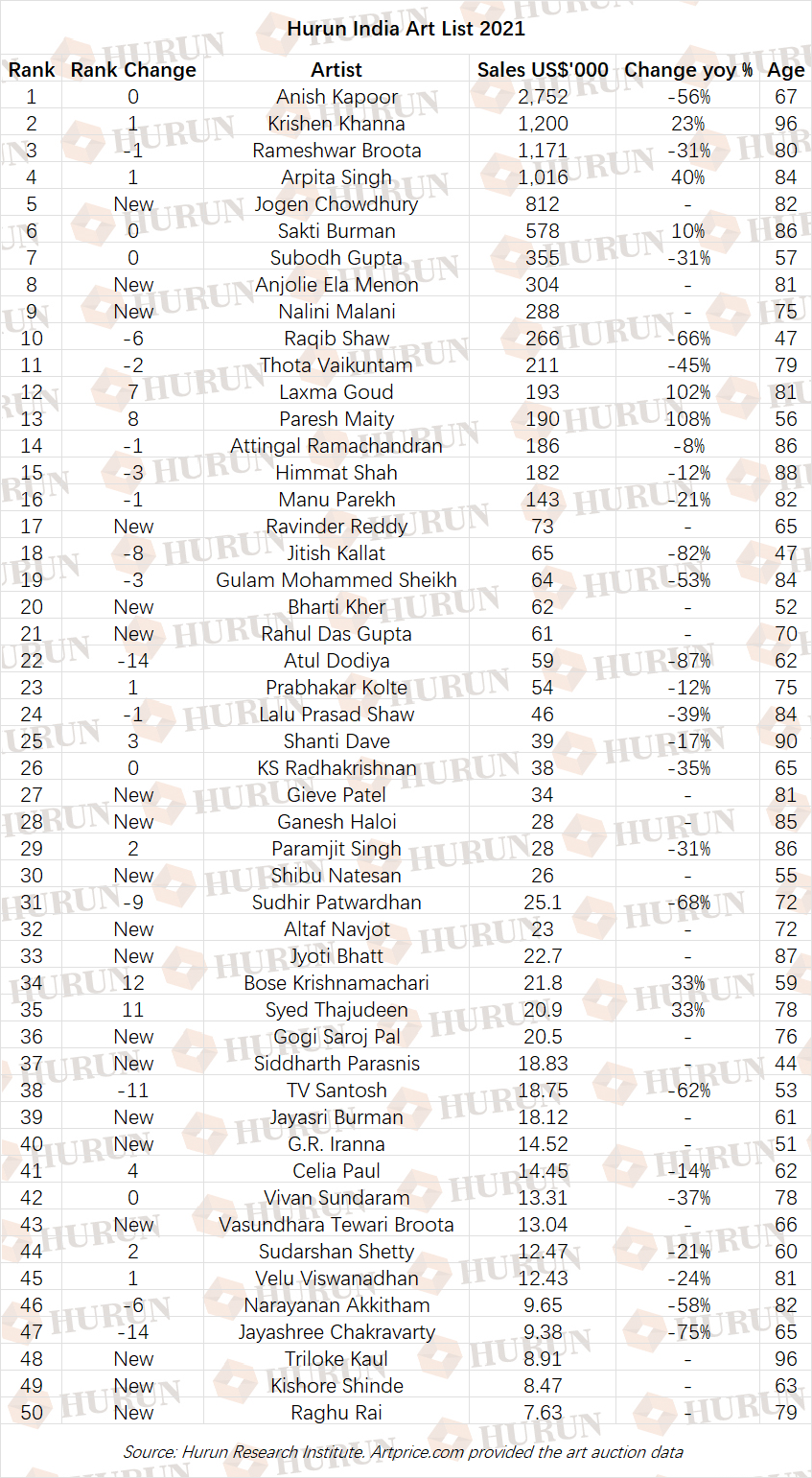