The Hurun Research Institute today released the Hurun China Under 40s Self-Made Rich List 2022, ranking the self-made entrepreneurs aged 40 or under. The cut-off was CNY 5 billion (equivalent to US$710 million), and wealth calculations are from 15 September. This is the 7th year of the list.

36 INDIVIDUALS MADE HURUN CHINA UNDER40S SELF-MADE RICH LIST 2022 WITH CUT-OFF OF US$710 MILLION, ALBEIT 7 LESS THAN LAST YEAR

ZHANG YIMING, 39, OF BYTEDANCE WAS TOP BY A LONG SHOT WITH US$35BN

SKY XU YANGTIAN, 39, OF FAST-FASHION RETAILER SHEIN, SECOND WITH US$7.2BN, UP ONE PLACE

MEDIA & ENTERTAINMENT MADE UP 1/3RD OF YOUNG ENTREPRENEURS ON THE LIST, FOLLOWED BY RETAIL WITH 5 AND F&B AND SOFTWARE SERVICES WITH 4 EACH. BETWEEN THEM, TOP 3 SECTORS MAKE UP 70% OF LIST

BEIJING REMAINS THE CITY WITH THE HIGHEST CONCENTRATION OF UNDER 40S SELF-MADE ENTREPRENEURS, WITH 14, 3 FEWER THAN LAST YEAR; SHANGHAI WAS SECOND WITH 9, UP 3, FOLLOWED BY SHENZHEN WITH 4. THE TOP 3 CITIES ACCOUNTED FOR NEARLY 80% OF THE LIST. CHENGDU AND CHANGSHA BOTH TIED FOR 4TH WITH 2. 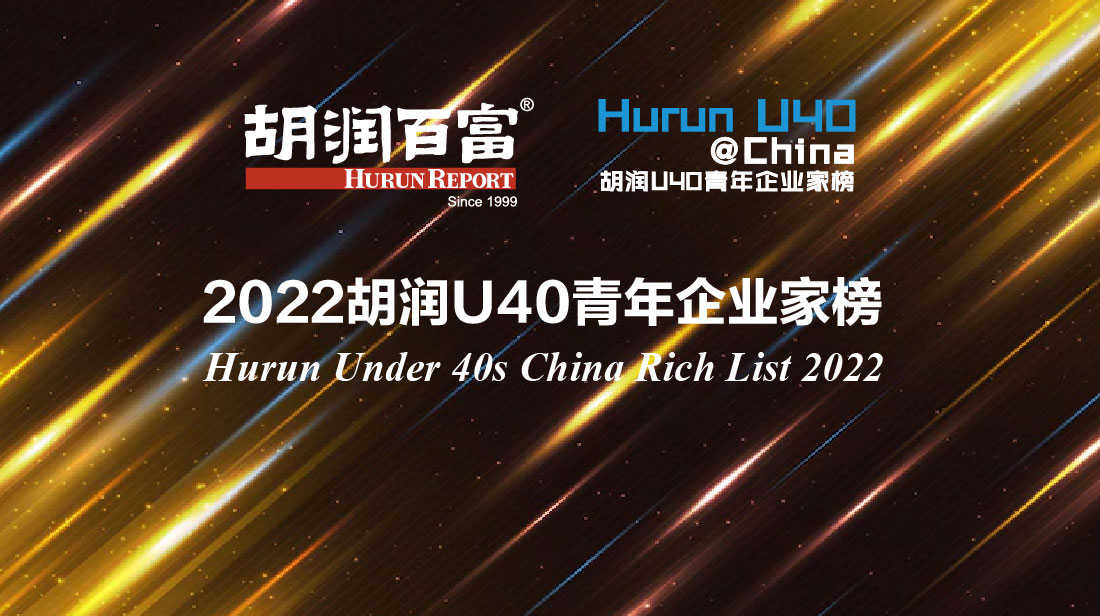 (10 November 2022, Shanghai) The Hurun Research Institute today released the Hurun China Under 40s Self-Made Rich List 2022, ranking the self-made entrepreneurs aged 40 or under. The cut-off was CNY 5 billion (equivalent to US$710 million), and wealth calculations are from 15 September. This is the 7th year of the list.

Rupert Hoogewerf, Hurun Report Chairman and Chief Researcher, said: “The top young entrepreneurs aged 40 or under in China start out their business with a much stronger global vision than their predecessors. Zhang Yiming, for example, has built the biggest global Chinese brand with TikTok, whilst Sky Xu has taken close to a third of the US and European fast fashion market, challenging the likes of Zara and H&M. The founder of online gamers like Mihayo and Lilith, have a significant proportion of their revenues coming from outside of China.”

“Online gaming had a good year.”

“The Hurun China Self self-made Under40s mostly made their fortunes with Media and Entertainment. However, it is curious to note that those aged 30 or under are mostly involved in new retail. By comparison the older entrepreneurs, such as those from the Hurun China Rich List, made their money from Industrial Products, Real Estate and Healthcare.”

Zhang Hongfu of tea and ice cream chain MXBC was the fastest riser, up four-fold to US$4bn on the back of a public listing in the last year. Five are new to the Top 10 this year. Cai Hongyu of Shanghai-based gaming platform Mihayo, and husband and wife founders Zhang Guotao and Li Yiwen of diamond brand DR were the biggest new faces on this year’s list, breaking straight into the Top 10. 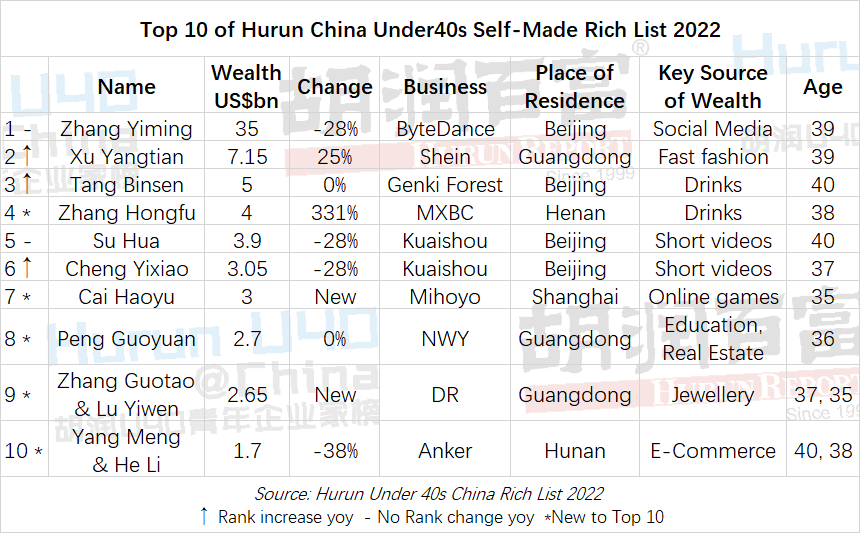 Sky Xu Yangtian, 39, was up one place to second with US$7.15bn, up 25%. Fast fashion brand Shein's sales exceeded CNY100bn in the first half of this year. Xu was born in Zibo, Shandong Province and started his own business in Nanjing, before moving his head office to Guangzhou. Despite being virtually unknown in China, Shein has become a world-leading cross-border fast fashion business, with a significant share of the US and European markets. Shein ranked 5th on the Hurun Global Unicorn Index 2022 Half-Year Report with a valuation of US$60bn.

Zhang Hongfu, 38, from MXBC, known in Chinese as Mixue Bingcheng, broke into the Top 10 for the first time with US$4bn, to 4th place, up 31. As of the end of March this year, MXBC had more than 20,000 outlets, including outlets in Indonesia and Vietnam. MXBC ranked among the Top 500 on the Global Unicorn Index 2022 Half-Year Report.

Su Hua, 40, of short video platform Kuaishou Technology, retained 5th with US$3.9bn. Su stepped down as CEO in October last year, keeping his role as chairman. Cheng Yixiao, 37, ranked 6th with US$3bn, up two places from last year. After taking over as CEO of Kuaishou, Cheng led Kuaishou to hit average daily active users of 350 million, up 19% year over year.

Cai Haoyu, 35, from online gamer Mihoyo, ranked 7th with US$3bn. Founded in 2011, Mihoyo has a number of popular games and has recently been expanding outside of China, with offices in Singapore, the US and Canada.

Peng Guoyuan, 36, ranked 8th with US$2.7bn, up five places from last year. Peng studied in the UK, started his business in Shanghai, and developed in Shenzhen. NWY mixes education with real estate, growing all around the country.

6 online gamers made up the bulk of this year’s 11 new faces, led by Cai Haoyu of Mihayo and Wang Xinwen of Lilith. Wang Shuo co-founded US-based Deel, which has grown to become a unicorn worth over US$10bn, helping customers process their international payroll. 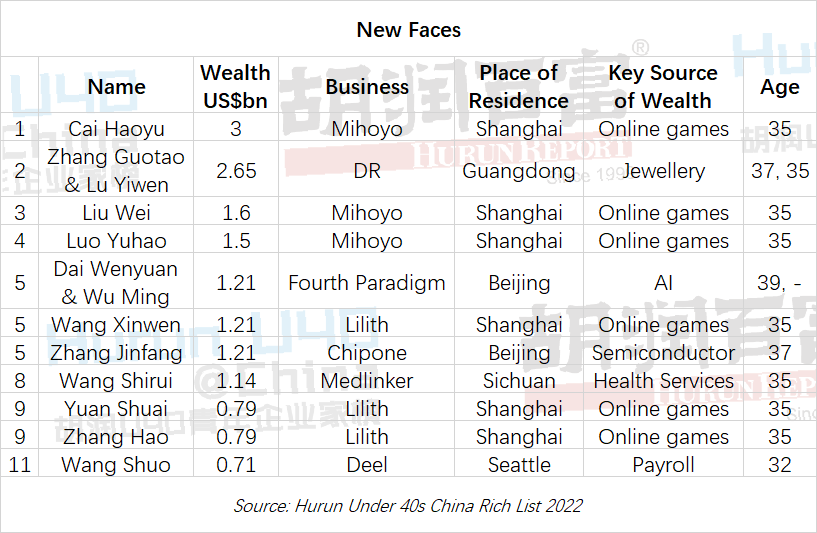 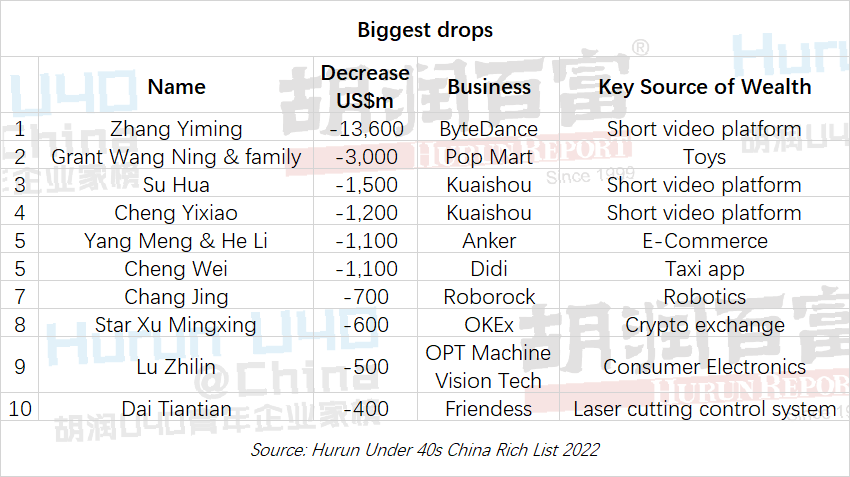 Which Industries are they doing? 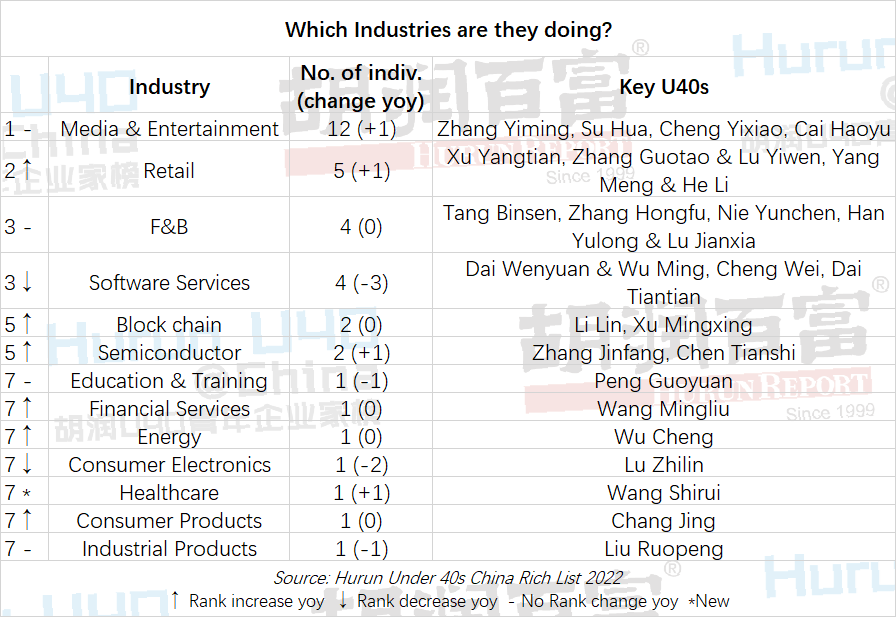 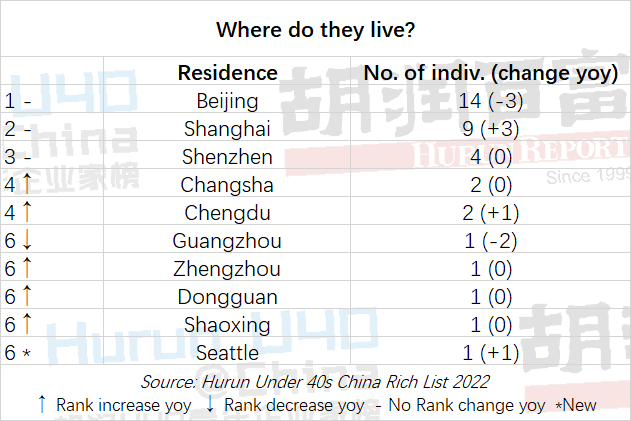 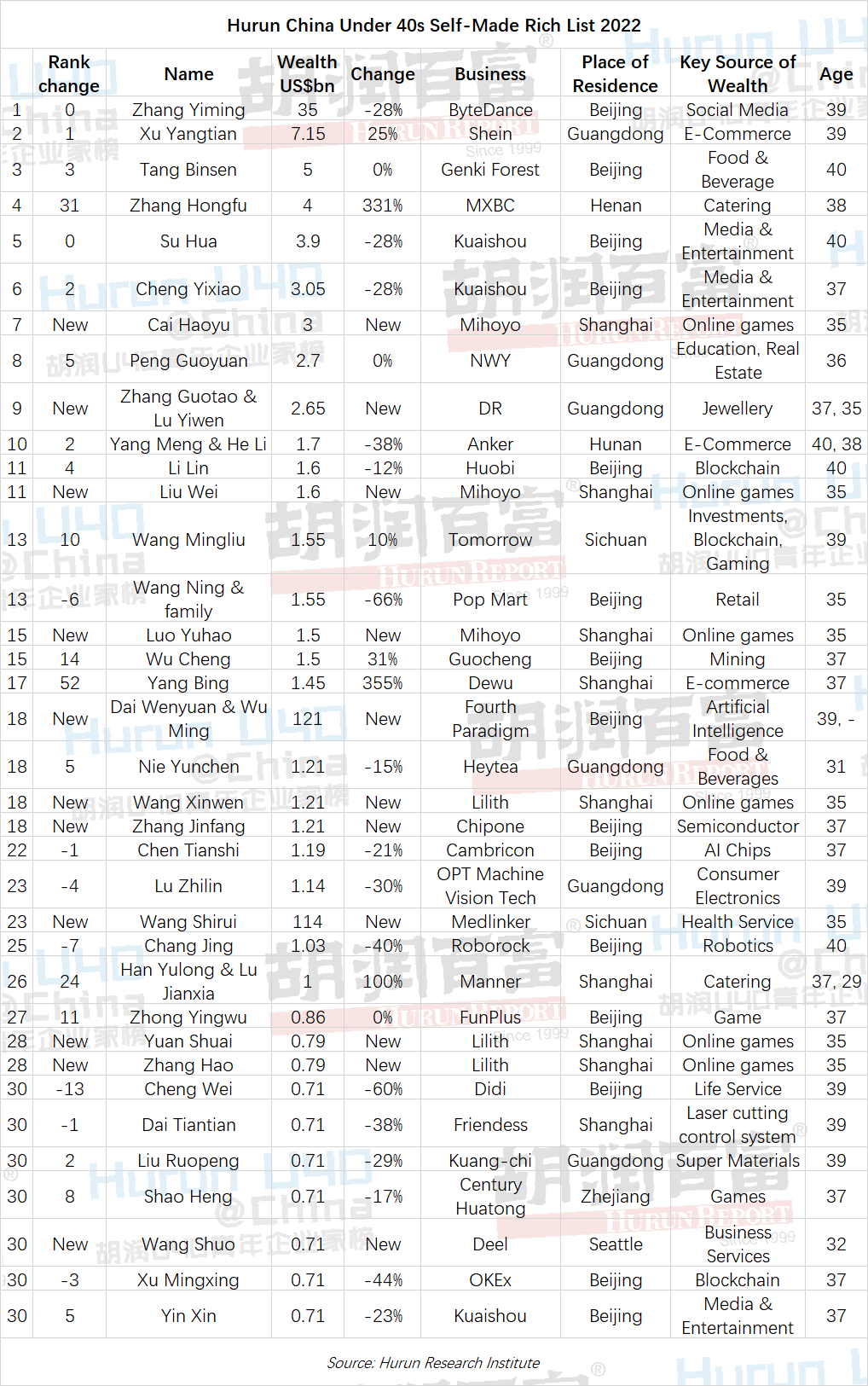