The Hurun Research Institute today released the Hurun Global Gazelle Index 2021, a list of the world’s start-ups founded in the 2000s, worth over US$500mn, not yet listed on a public exchange and most likely to ‘go unicorn’, ie hit a valuation of US$1bn, within three years.

IN SEARCH OF START-UPS FROM THE 2000S WITH A VALUATION OF US$500MN TO US$1BN, NOT YET LISTED ON A PUBLIC EXCHANGE AND MOST LIKELY TO ‘GO UNICORN’ WITHIN 3YRS.

INDIA AND UK THIRD AND FOURTH WITH 29 AND 26

HEALTHCARE AND Financial services most disrupted by GAZELLES, followed by BUSINESS MANAGEMENT SOLUTIONS and RETAIL

SEQUOIA WORLD’S MOST SUCCESSFUL GAZELLE INVESTOR, INVESTING INTO ONE IN SEVEN OF WORLD’S GAZELLES, FOLLOWED BY GGV CAPITAL, MATRIX PARTNERS, CICC AND TENCENT. 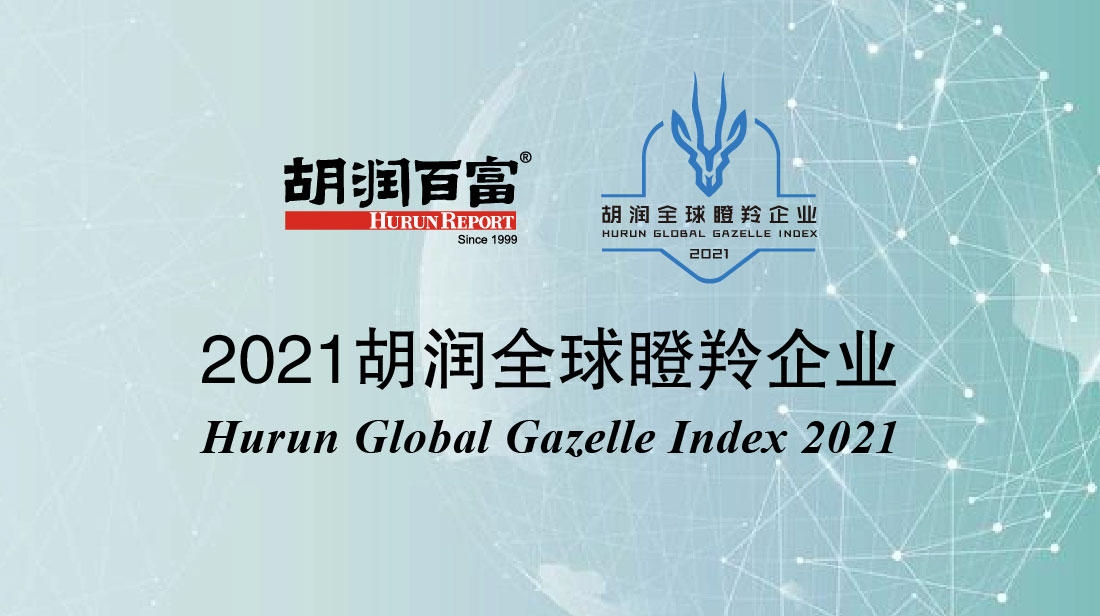 (25 January 2022, Shanghai, China, Mumbai, India and Oxford, UK) The Hurun Research Institute today released the Hurun Global Gazelle Index 2021, a list of the world’s start-ups founded in the 2000s, worth over US$500mn, not yet listed on a public exchange and most likely to ‘go unicorn’, ie hit a valuation of US$1bn, within three years.  The cut-off date used was 1 November 2021. Hurun Research has been tracking unicorns since 2017 and Gazelles in China and India since 2018. This is the first time Hurun Research has launched the Hurun Gazelle Index on a global level.

Hurun Research found 525 Gazelles in the world, based in 30 countries and 134 cities. On average, they were set up in 2014, with the vast majority selling software and services, with only 26% selling physical products. 55% are selling to businesses, whilst 45% are consumer-facing. Gazelles were disrupting healthcare and financial services.

Hurun Report Chairman and Chief Researcher Rupert Hoogewerf said: “2021 is officially the most successful year for start-ups ever. There are today more than 500 known Gazelles, leading a new generation of disruptive technology.”

“The speed of value creation is phenomenal. It took the Hurun Gazelles only seven years from founding to make it to Gazelle, meaning these start-ups started out in 2014 on average, when their founders were 34 years old. What were you doing seven years ago? Founder teams and investors are becoming more experienced at knowing how to build fast scale-up businesses with focus on value-creation over sales.”

“Gazelles are a good indication of which sectors unicorns most likely to come from. Which sectors do these gazelles come from? Half are startups in the fields of FinTech, Biotech, SaaS and HealthTech, sectors that the world’s smartest capital is investing into.”

“The countries these Gazelles gives a good indication which countries have the world’s best start-up ecosystems. The US and China dominate with 71% of the world’s known Gazelles, despite representing only a quarter of the world’s population. The rest of the world is playing catch-up, led by India, the UK, Germany, France, Israel and Singapore.”

“A comparison of the 201 US and 171 China Gazelles throw up some interesting dynamics. In each case, half their Gazelles come from just two cities: San Francisco and New York in the US, compared with Shanghai and Beijing in Shanghai. By sector, the US, half came from FinTech, SaaS and Biotech, whilst in China, they came from Biotech, Enterprise Services and AI.”

“30% of last year’s China Gazelles were ‘promoted’ out of this year’s list, mainly by going unicorn, IPO or being acquired. A further 13% dropped off because Hurun Research no longer believed they could go unicorn within three years.”

“A successful start-up ecosystem requires role models, both individuals, such as those from the Hurun Rich Lists, and companies, such as those from the Hurun Global Unicorn and Hurun Global 500 most valuable companies series. If a city or country can attract the world’s most successful entrepreneurs and companies to set up shop there, that will have a roll-on effect. Entrepreneurship is infectious and cities with lots of role models are likely to attract the brightest and best young entrepreneurs. It becomes a self-fulfilling prophesy.”

“The role of investors is evolving from just providers of cash to mentorship and scale-up opportunities. The world’s leading Gazelle investors are building ecosystems with their portfolios, hugely attractive to the world’s fastest-growing start-ups. Being able to say you have one of these brands as an investor adds significant credibility. Sequoia is the world’s most successful investment platform at finding and investing into Gazelles, investing into 79 of the world’s known Gazelles, followed by GGV Capital, MatrixPartners, CICC and Tencent. In terms of the most global investment houses, ie those that invested into Gazelles from the largest spread of countries, were led by SoftBank, Goldman Sachs, Temasek and Sequoia.”

“India is in the midst of a start-up boom, more than doubling its Gazelles to take the country’s official tally of unicorns to 29, and overtake the UK to third place in the world.”

“The Hurun Global Gazelle Index is compiled using data from the world’s leading investors, making this perhaps the most serious attempt to capture all of the world’s Gazelles into one list.”

Where are the World’s Gazelles based?

The world’s Gazelles are based in only 30 countries around the world, spread around 134 cities.

The USA and China led with 201 and 171, together accounting for 71% of the world’s known Gazelles.

The Top 7 countries for Gazelles are the same as those for the Hurun Global Unicorn Index 2021. Singapore did better for gazelles than for unicorns, in 7th place for gazelles  compared with 11th for unicorns.

By city, San Francisco is the world’s Gazelle capital with 59. Shanghai is a strong second ahead of Beijing and New York. At the unicorn level, Beijing is still far ahead of Shanghai.

London is the Gazelle capital of Europe with 25 Gazelles, more than Berlin and Paris combined. 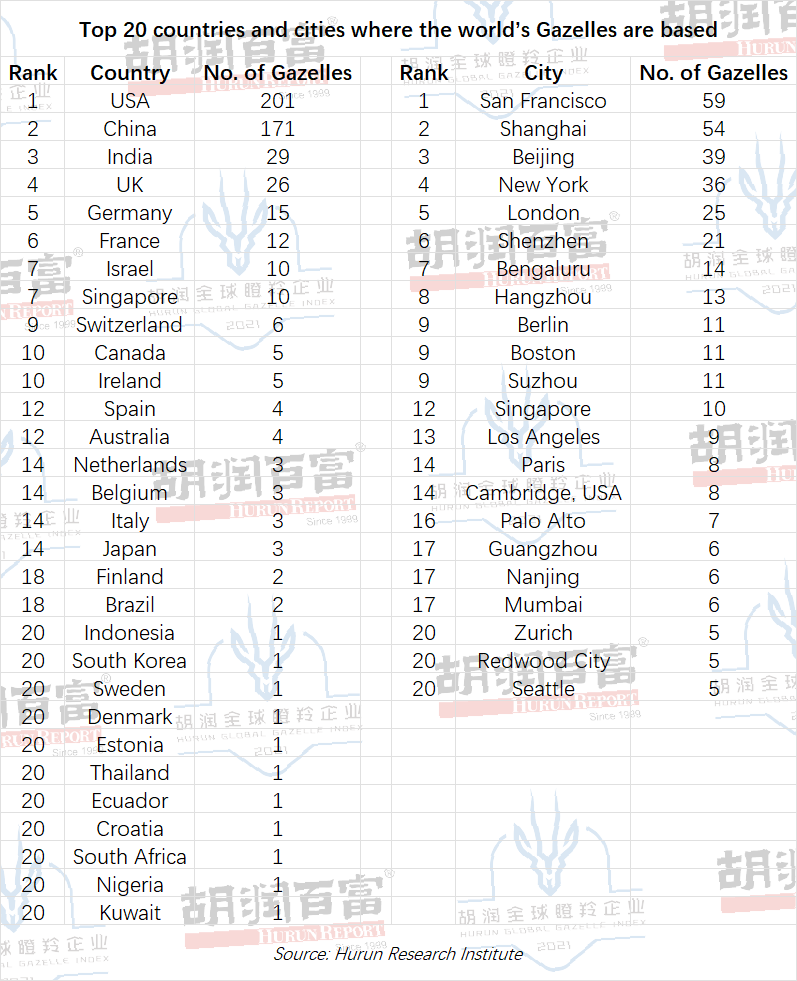 Half of the US Gazelles were in FinTech, SaaS, Biotech and HealthTech, whilst for China it was Biotech, Enterprise Services, AI and HealthTech.

By cities, both countries are similar in that their top two cities make up 50% of their Gazelles. At the Gazelle level, Shanghai outperformed Beijing, and Suzhou outperformed Nanjing, unlike at the Unicorn level, where it was the reverse. In the USA, Chicago does not do as well with Gazelles as it does with unicorns. 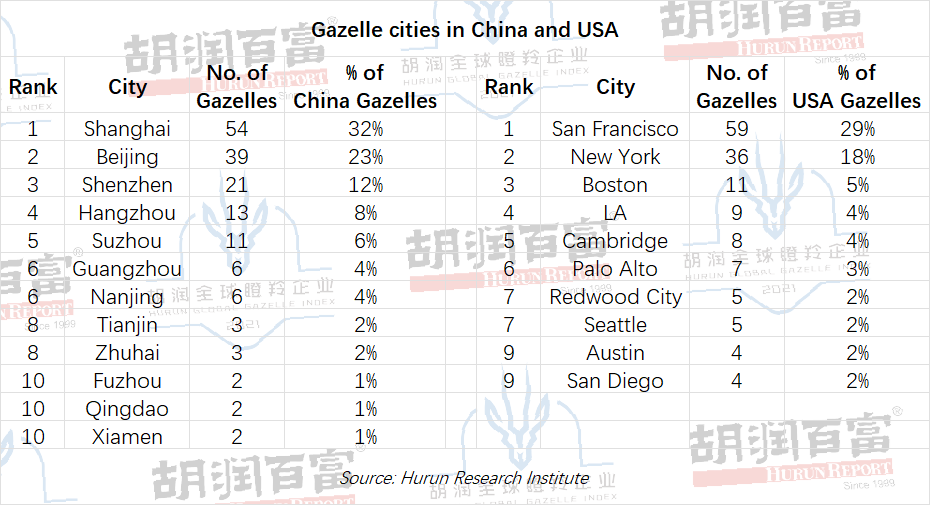 Asia led North America as the continent creating the most Gazelles in the world. 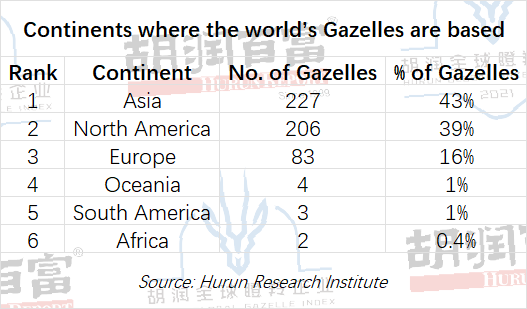 What industries do they come from? 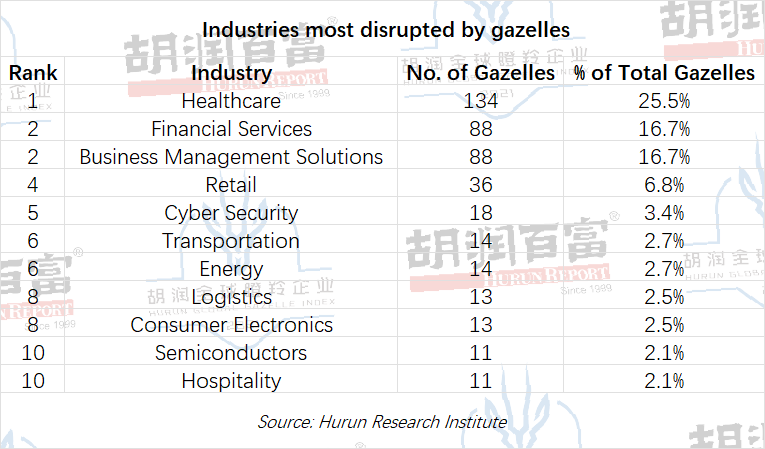 What is the core business of these Gazelles?

FinTech is the core business for Gazelles, followed by Biotech, SaaS, Health Tech and E-commerce. 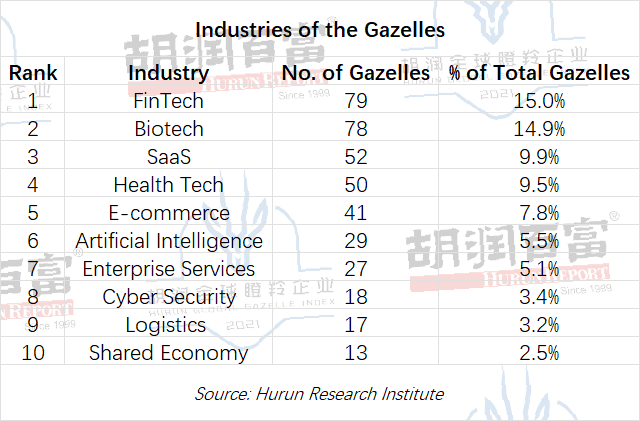 Which investors are the best at finding Gazelles?

SoftBank, Goldman Sachs, Temasek and Sequoia led the way in terms of number of countries the Gazelles came from, ie the most global investment houses. 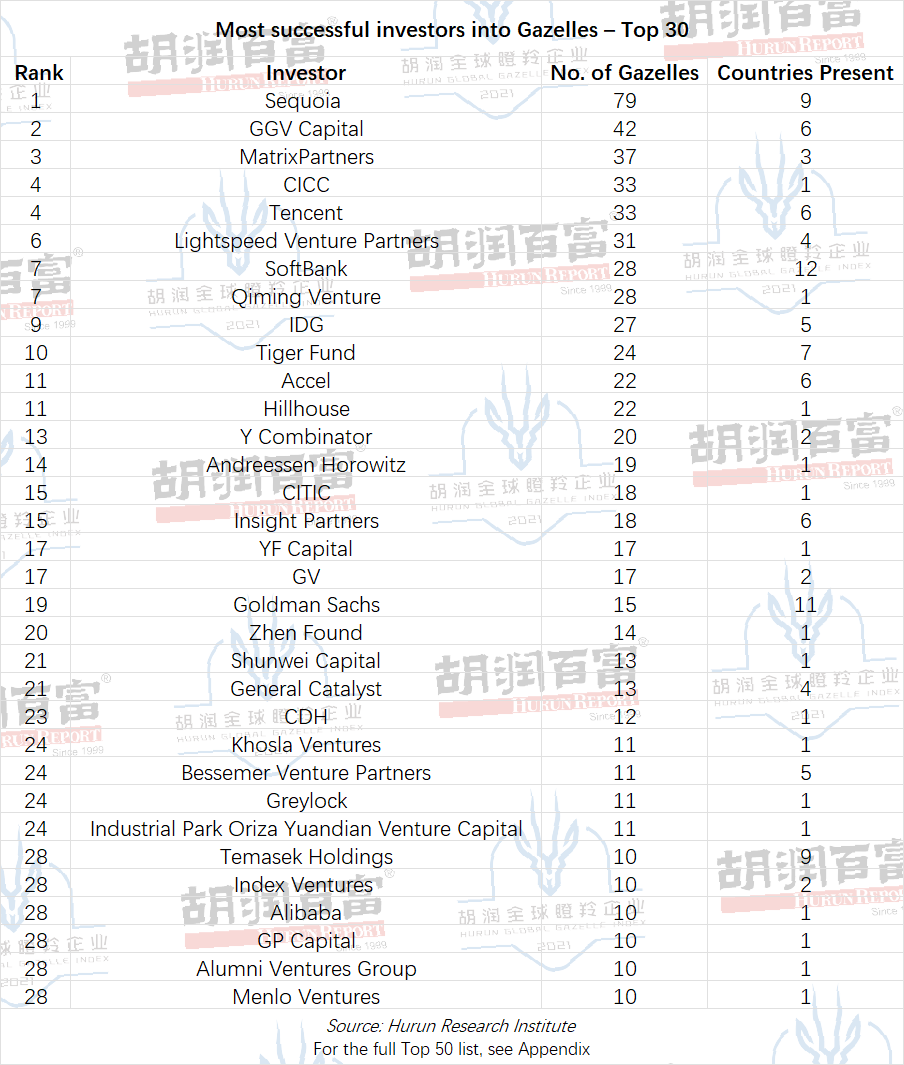 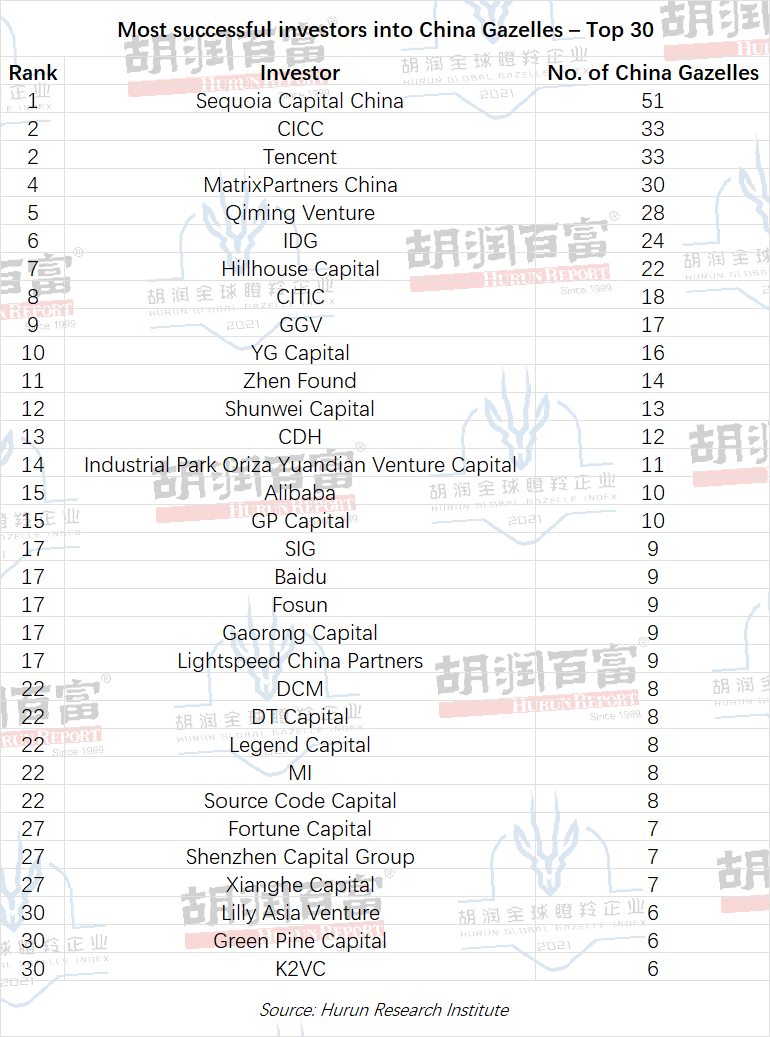 Last year, Hurun Research only did the Gazelles Index for China, so the comparatives here are for China only.

Overall, 30% of last year’s China list were promoted and 13% were demoted.

171 Gazelles in China made the cut this year, 71 more than last year and more than double that of two years ago. 114 were new faces. 30 companies were promoted from last year’s Gazelle list, with 15 ‘going unicorn’, 14 going IPO and 1 acquired. 13 dropped out, no longer making the cut. 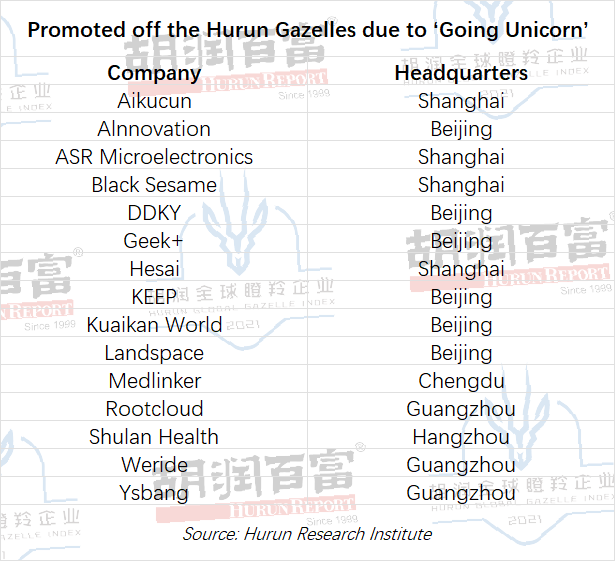 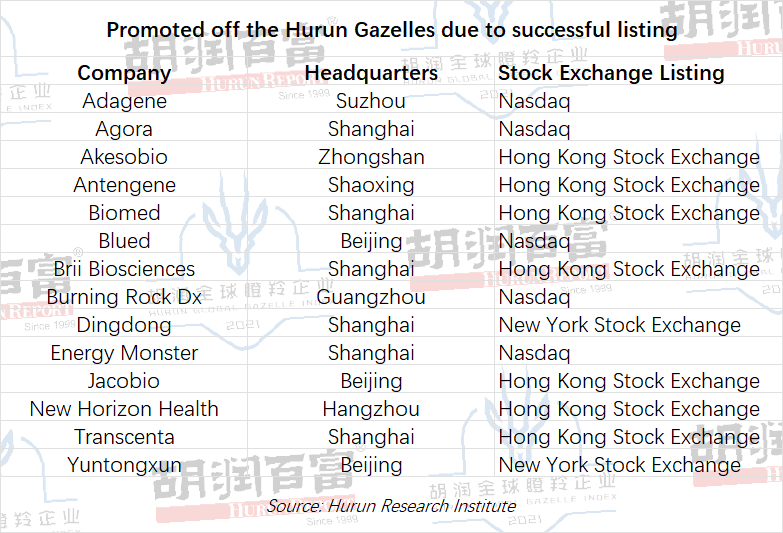 Software and services versus physical products?

74% sell software and services, led by FinTech and followed by SaaS, E-commerce and HealthTech.

26% have a physical product as a core business offering, led by Biotech, HealthTech, Semiconductors and Robotics.

The Hurun Global Gazelles Index 2021 is compiled by the Hurun Research Institute with a 1 November 2021 cut-off. Hurun defines a Gazelle as a start-up founded in the 2000s, not yet listed on a public exchange and most likely in our opinion to reach a valuation of US$1bn – ie ‘go unicorn’ – in the next three years. Gazelles mostly have a valuation today of between US$500mn to US$1bn.

Many of the world’s top investment houses provided details of their portfolio, which the Hurun research team cross-checked against specialized investment databases, industry experts, media sources, as well as Gazelle co-founders.

Valuing Gazelles can be tricky. The very nature of these super-fast growing companies makes valuations hard to pin down, but to ensure consistency of the valuations, the Hurun research team used the most recent valuation based on a sizeable round. Where it becomes harder is when a Gazelle is underperforming or on its way down, since it is unlikely to have a new round of investment at a valuation lower than the previous round. In this case, Hurun uses industry comparatives to ascertain a new lower valuation.

Countries and cities are ranked according to the Gazelle head office.

Gazelles leave the Hurun Global Gazelles Index by being ‘promoted’ or ‘demoted’.  Promotions are by becoming a unicorn, listing on a public exchange (IPO) or being acquired. Demotions are when Hurun Research believes they will no longer become a unicorn within three years.

Hurun Research has been tracking unicorns since 2017 and Gazelles since 2018.

Disclaimer. All the data collection and the research has been carried out by Hurun Research. This report is meant for information purposes only. Reasonable care and caution have been taken in preparing this report. The information contained in this report has been obtained from sources that are considered reliable. By accessing and/or using any part of the report, the user accepts this disclaimer and exclusion of liability which operates to the benefit of Hurun. Hurun does not guarantee the accuracy, adequacy or completeness of any information contained in the report and neither shall it be responsible for any errors or omissions in or for the results obtained from the use of such information. No third party whose information is referenced in this report under the credit to it, assumes any liability towards the user with respect to its information. Hurun shall not be liable for any decisions made by the user based on this report (including those of investment or divestiture) and the user takes full responsibility for their decisions made based on this report. Hurun shall not be liable to any user of this report (and expressly disclaim liability) for any loss, damage of any nature, including but not limited to direct, indirect, punitive, special, exemplary, consequential losses, loss of profit, lost business and economic loss regardless of the cause or form of action and regardless of whether or not any such loss could have been foreseen.

Appendix – Most Successful Gazelles Investors in the World 2021 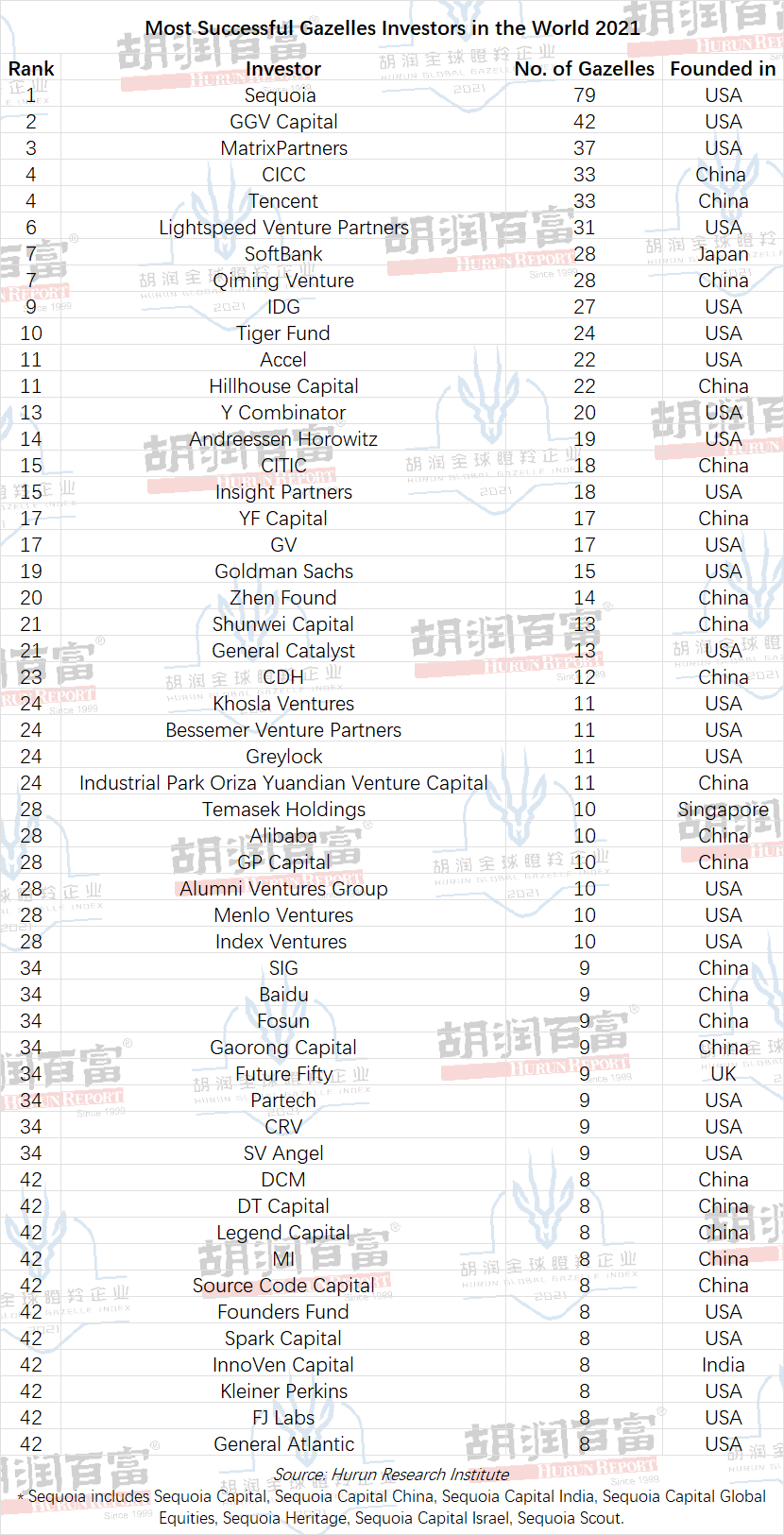