The Hurun Research Institute today released the Hurun Largest Foreign & HK/Macau/Taiwan Companies in China 2021, a list of 100 companies, ranked by their sales and number of employees in China.

Automotives led the way with 16 companies, of which Volkswagen, General Motors and Toyota made the Top 5

Healthcare, led by the likes of was led by AstraZeneca, Johnson & Johnson and Bayer, tied for second place with Consumer Goods, led by LVMH, Chai Tai Fook and P&G. Consumer Electronics, led by Apple and Samsung, were fourth. Food & Beverages, led by Coca-Cola, Nestle and Starrbucks were fifth. The Top 4 industries accounted for half of the Top 100.

34 companies were from the USA, followed by 14 from Japan, 12 from the UK and Germany each, and 8 from France. The Top 5 countries accounted for 80% of the Top 100. By continent, European companies were ahead of North America.

Shanghai led by the way for China headquarters with 60, followed by Beijing with 32. Shenzhen was third with 3. 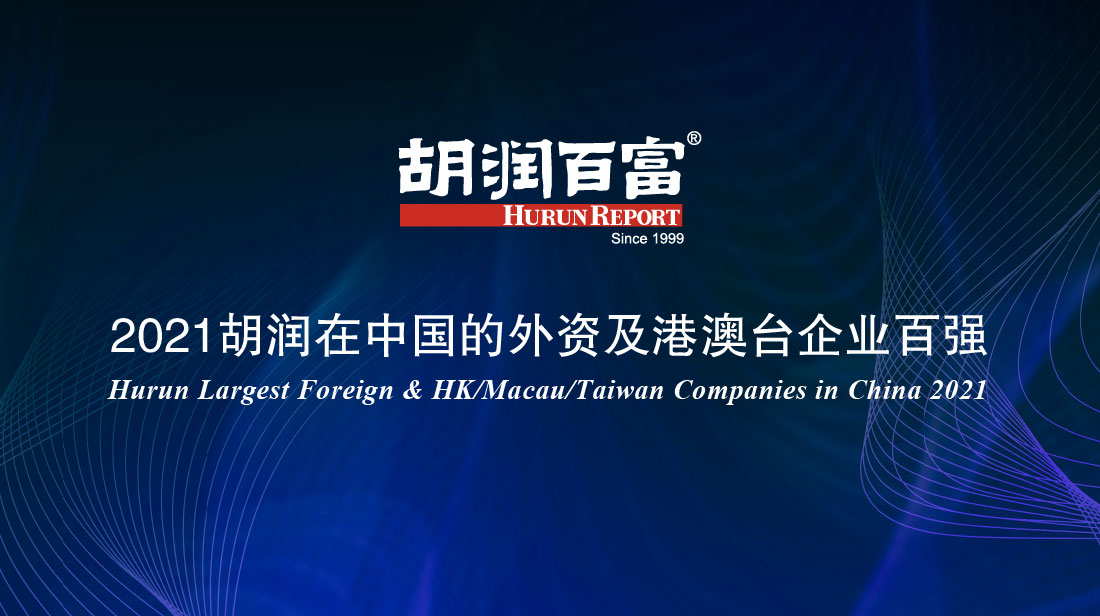 Overall, the Hurun Top 100 had sales in China last year of US$900bn, equivalent to 6% of China's annual GDP, an average of US$9bn per company. Overall, they had 2.5 million employees in China, an average of 25,000 per company. 61% are consumer brands, whilst 39% are B2B companies. 82% sell physical products and 18% sell software or services. The automotive, healthcare, consumer products and consumer electronics industries between them account for half of the Hurun Top 100. The average age of these companies is 91 years old, with 57 years of history in China.

Rupert Hoogewerf, chairman and chief researcher of Hurun Report, said: “The idea behind this list of the Hurun Largest Foreign & HK/Macau/Taiwan Companies in China is to highlight those companies, which are perhaps the closest thing to economic rolemodels on how to do business in China. Between them, they had sales of almost US$1 trillion in China, equivalent to 6% of China's GDP, and between them they have 2.5 million employees.”

“It is interesting to see which sectors these companies are from, since it shows perhaps in which sectors foreign and HK/Macau/Taiwan have had the biggest economic impact, being healthcare, consumer products and consumer electronics.”

“A look at which countries these companies come from is also interesting. US companies led the way, with 1 in 3 of the Hurun list from the US, followed by Japan, the UK, Germany, and France. These five countries accounted for 80% of the Hurun Top 100. By continent, however, it was Europe that contributed the most, accounting for 45% of the Hurun list.”

“To put this list together, we used China sales as the core measure for assessing which companies made the list, together with number of employees in China, mainly because these seem to be the criteria most valued by local governments. The cut-off to make the Hurun Top 100 required a company to have annual sales in China of US$1.5bn and 5,000 employees.”

“Today we are launching this list at the Hurun Global 500 CEO Conference, put out in association with the Jiaxing Economic & Technological Development Zone (International Business Park). Perhaps unsurprisingly, the vast majority – 86 companies this year - of the Hurun Largest Foreign & HK/Macau/Taiwan Companies in China are also on the Hurun Global 500, which ranks the world's most valuable non-state-controlled companies.”

This is an English language summary of the full Chinese press release which can be found at www.hurun.net. For media inquiries please contact our public relations team whose contact details can be found at the end of this report. 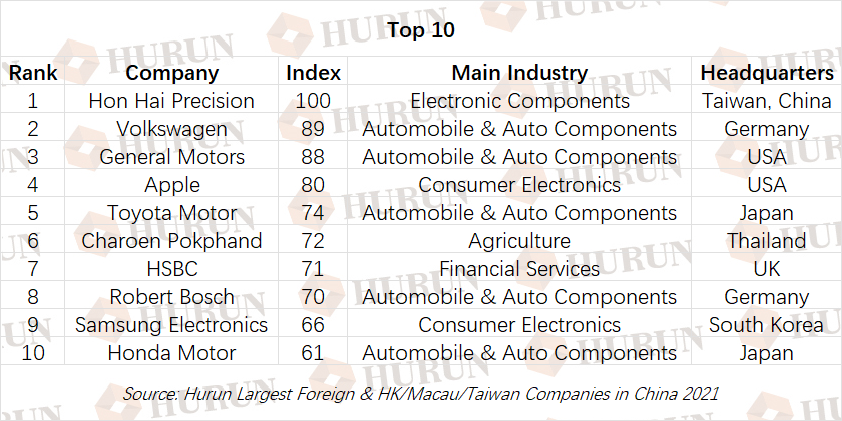 Volkswagen ranked 2nd. VW entered the Chinese market in 1984. In recent years, the focus has been on autonomous driving and low-carbon travel. Volkswagen and its joint ventures have more than 100,000 employees in China. Volkswagen ranked 83rd in the Hurun Global 500 with a value of US$150bn.

General Motors ranked 3rd. It appeared in the Chinese market in 1924. Its brands include Buick, Chevrolet, Cadillac, etc. GM and its joint ventures have 58,000 employees in China. GM ranked 181st in the Hurun Global 500 with a value of US$89.6bn.

Apple ranked 4th. Apple entered the Chinese market in 1999, and the iPhone series of mobile phones officially entered China in 2010, and now occupy 11% of the Chinese mobile phone market. It has 10,000 employees in China. Apple topped this year's Hurun Global 500 list with a market cap of US$2,443bn.

Toyota Motor ranked 5th. Entering the Chinese market in 1964, Toyota has now established 28 major wholly-owned and joint venture companies in China with 100,000 employees. Toyota Motor ranked 27th in the Hurun Global 500 with a value of US$292bn.

Charoen Pokphand ranked 6th. CP Group was founded in 1921 in Bangkok, Thailand by brothers Xie Yichu and Xie Shaofei. Entered China in 1979 and built the first feed factory in Shenzhen. CP has established multiple brands such as Chia Tai Feed, CP Lotus and Chia Tai Variety Show in China, and has 90,000 employees in China.

HSBC ranked 7th. HSBC entered the Chinese market in 1865. HSBC China currently has more than 7,000 employees and has established more than 150 service outlets in more than 50 cities in the Mainland China. HSBC ranked 127th in this year's Hurun Global 500 with a value of US$112bn..

Robert Bosch ranked 8th. Bosch entered the Chinese market in 1909 and currently operates 56 companies in China with approximately 53,000 employees. Robert Bosch ranked 68th in this year's Hurun Global 500 with a value of US$172bn.

Honda Motor ranked 10th. Entered the Chinese market in 1973, and its businesses mainly include automobiles, motorcycles and power products. Honda is also committed to the research of new energy vehicles, and it also occupies an important position in the research of new fuels. Honda sold more than 1.62 million vehicles in China last year. Honda Motor ranked 286th in this year's Hurun Global 500 with a value of US$58.9bn.

The Top 100 came from 22 industries. The Automobile & Auto Components, Healthcare, Consumer Goods, and Consumer Electronics industries have the most companies on the list, with 16, 14, 14, and 7, respectively. These four industries account for half of the Top 100.

Unlike the Hurun Global 500, financial services and energy companies are relatively few on the top 100 list. 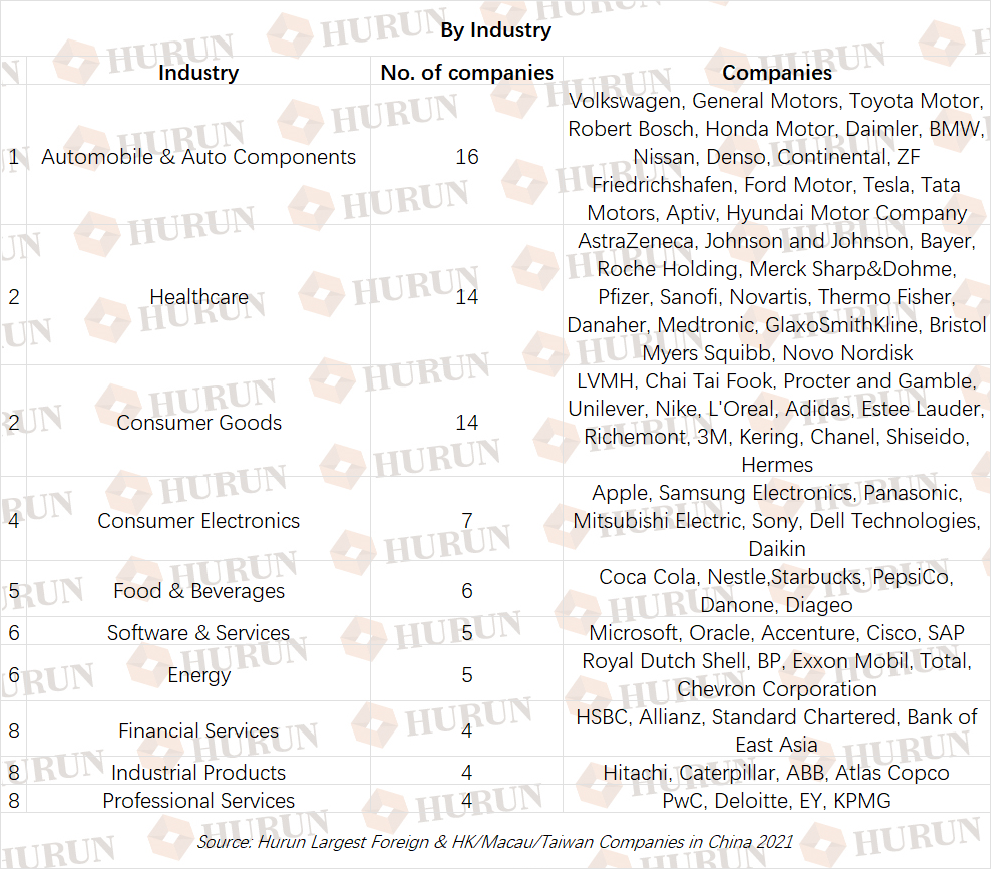 The Top 100 come from 15 countries, of which the USA has the largest number of companies, with 34, followed by Japan with 14, the UK and Germany tied for third place with 12 each, and France with 8 companies. 3 companies from Hong Kong, Macau and Taiwan made the list. 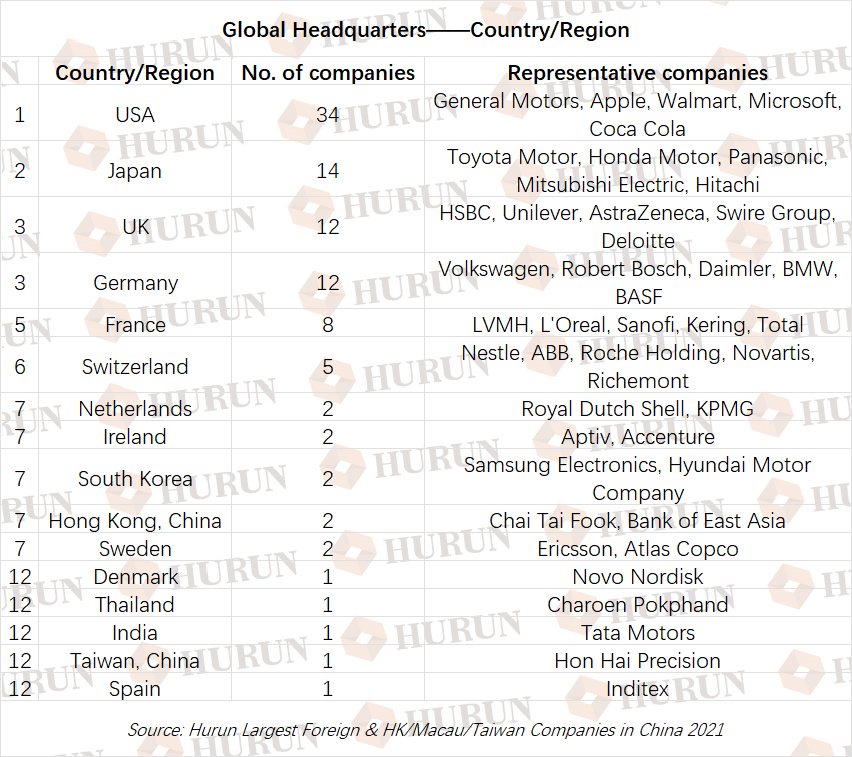 Europe led the way with 45 of the Top 100. There are none from South America, Africa, and Oceania.

Where headquartered in China?

Shanghai is the city of choice for 60 companies, followed by Beijing with 32. Shenzhen was 3rd with 3, and Guangzhou, Tianjin and Xiamen each have 1.

Other Companies of Interest

Panasonic ranked 16th. Panasonic's business in mainland China officially began in 1978, starting from the initial provision of television sets, refrigerators, has involved in research and development, manufacturing, sales, service, logistics and other aspects.

Chow Tai Fook ranked 22nd. Since opening its first store in the Chinese mainland in 1929, it now has more than 1,500 stores and 2,000 retail jewelry outlets.

TDK, ranked 29th, has over half of its revenues in China.

Swire Group ranked 53rd with just under 40,000 employees. Its business core is mainly located in the Asia-pacific region, involving real estate, aviation, shipping, etc. It has been rooted in China for more than 100 years since 1866 and will complete several Taikoo real estate projects this year.

How Old Are They?

Swire Group was the first to establish an import and export business in Liverpool in 1816. 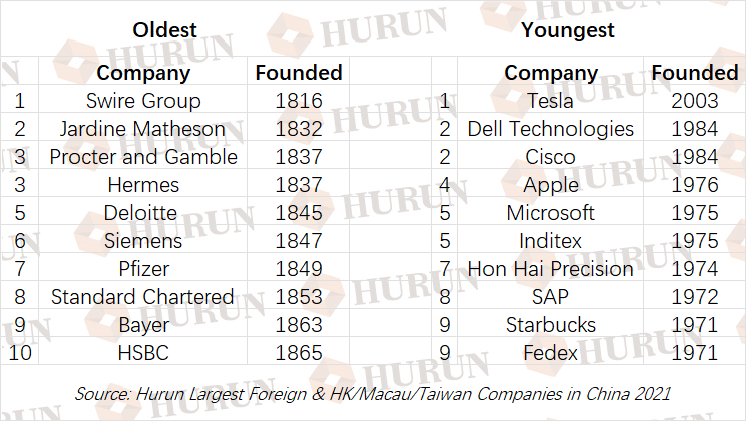 When Did They Come to China?

The Top 100 entered the Chinese market in 1964 on average, which means they have been operating in China for an average of 57 years. 6 companies entered China in the last 20 years, led by Tesla, which has not even been in China for ten years.

The first to enter the Chinese market was Jardine Matheson, and in 1832. 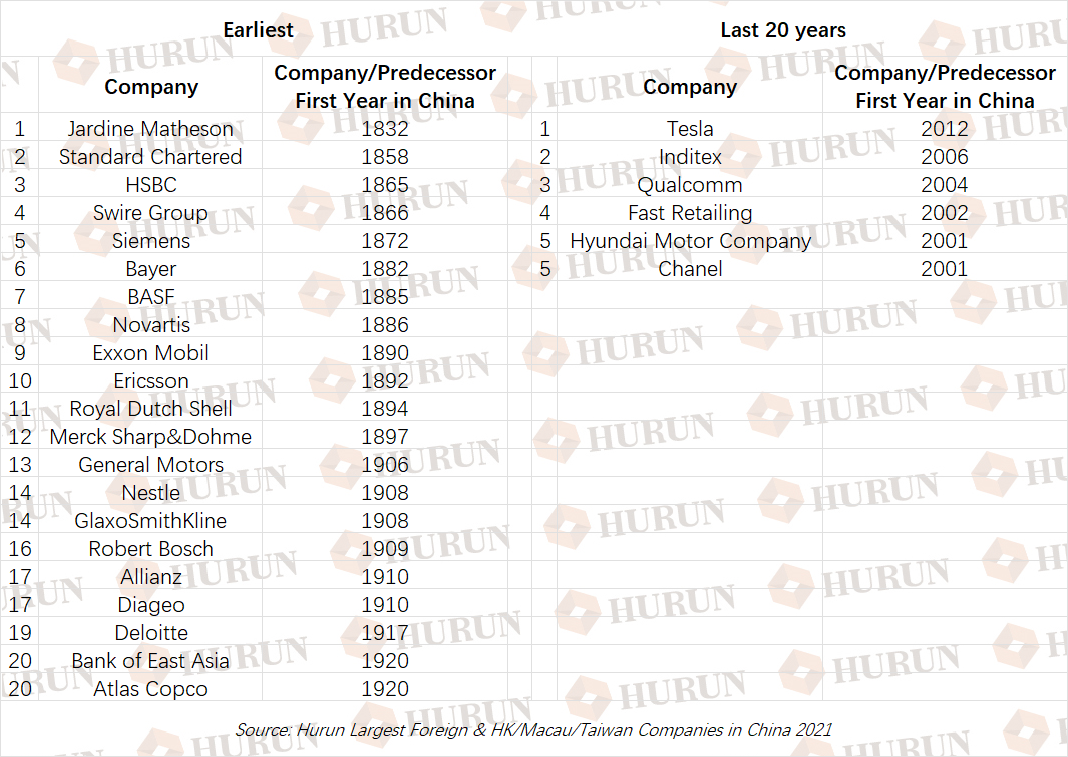 Companies with the Largest Sales 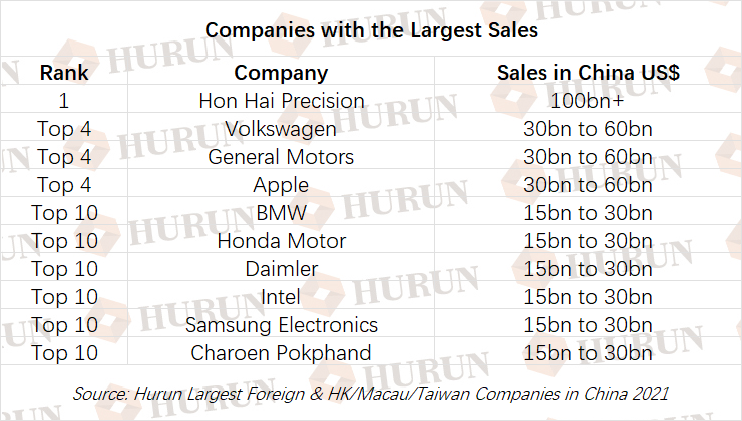 Companies with the Most Employees

Hon Hai Precision has the most employees, with more than 600,000 in China. 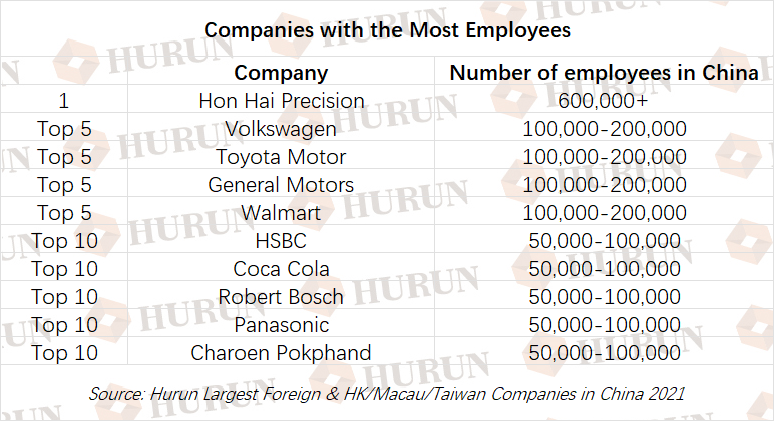 The survey targets of this list are foreign companies and companies from Hong Kong, Macau and Taiwan with sales in China. Some companies appear to be quite large in China, such as iron ore suppliers BHP, Vale and Rio Tinto, but since their sales are significantly imports, they were not included. Below is a list of companies with large imports to China but relatively small production in China. 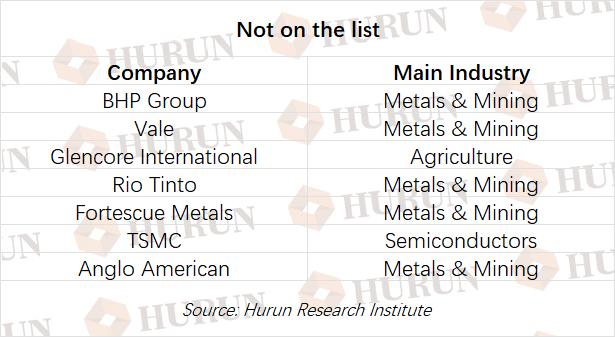 Jiaxing is located in the northeast of Zhejiang Province, bordering Shanghai, Suzhou, Hangzhou and Hangzhou Bay on the east, north, west and south. The city covers 4,223km² of land, 1,523 km² of ocean, and has a permanent population of 5.4 million. According to the latest statistics, Jiaxing ranks 35th among the top 100 cities of the nation for its comprehensive strength. It ranks 41st in terms of total GDP, and ranks 20th and 5th by comprehensive fiscal strength nationwide and among prefecture-level cities.

Best-known as the birthplace of the Communist Party of China, Jiaxing is also the cradle of the Majiabang civilization, the forerunner of connecting with Shanghai as well as the whole Yangtze River Delta Region, the permanent location of the World Internet Conference, and the pioneer of balancing urban and rural development. Jiaxing has been carrying out the national strategy of the integrated development of the Yangtze River Delta Region, working in line with building the best “observation window” of China’s socialist system, and painted a picture of a fast-changing, fast-growing, high-quality, all-benefiting city with the “Five Colors of Jiaxing”.

Located in downtown Jiaxing, the Jiaxing Economic & Technological Development Zone is a typical urban economic development zone. It was established in August 1992, among the first batch of provincial-level economic development zones approved by the Government of Zhejiang Province. In March 2010, it was upgraded to national-level by the State Council and has since joined offices with the Jiaxing International Business Park established in January 2010. Today, the Jiaxing Economic & Technological Development Zone (International Business Park) administers an area of 110km².